On a recent visit to Belgium I was able to visit the grave of Prince Maurice and as a result of that can now add more information to my previous blog. 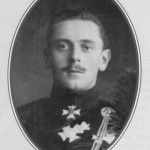 Prince Maurice Victor Donald of Battenberg rests along with many others in Ypres Town CWGC Cemetery & Extension.  The cemetery has two sections – one is CWGC only, walk up the steps at the far right and you enter the town cemetery with a small CWGC section to the left of the path.  But, as  you reach the top of the small run of steps don’t focus on the commonly recognised CWGC headstones, take a look to your left and you will see a lone headstone, with the plot marked out by kerbstones.  Here rests Prince Maurice 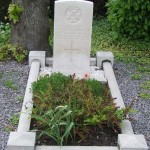