Totally off my normal topics of blogging but I hope you will find just as interesting.

In 2010 our children cycled from London to Paris – with  little boat ride in the middle and raised quite a bit of money for Macmillan Cancer Care.

In the following year my daughter  changed her clothes buying habits by buying only second hand and vintage clothes (you can read all about it here).  She has also cycled around Mt Kilamanjaro and on both of her projects has raised money, met like minded people and most of the time had a good time. 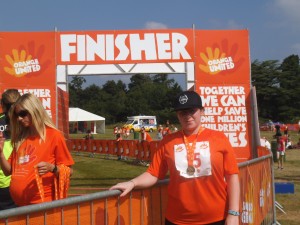 Our son, on the other had a break from big events and concentrated on road cycling.  One of his fundraisers was a static 100 mile cycle in a newly opened shopping centre.  Another similar event was held this summer as what you could call a ‘training session’ to taking part in the Outlaw Ironman event in July earlier this year – not an event either his sister or I would even dream of attempting (a 2.5 mile swim, followed by a 112 mile on a bike and finally a full 26.2 mile run all in less than 17 hours, we tell him he is mad. Since then he has signed up for next years Outlaw, has a few runs, marathons and cycles lined up and been asked by Esquire Coffee House to front their Macmillan Coffee Morning.

In our childrens events, I enthuse, sympathise, go here, go there, bake for coffee mornings, run raffles,  travel the country to see their events and have been known to be awake at 4am (yes there is such a time) after camping for the first time to watch the 6am start of the Outlaw Ironman.  Staying all day and leaving around midnight – a long, very hot day but what an atmosphere. London was the previous day to way our daughter in a GSK charity event and Nottingham by the late afternoon for the Outlaw. 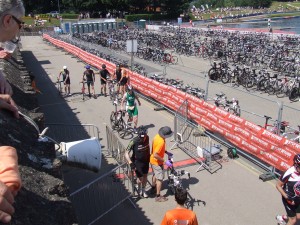 They raise the money and I seem like a ‘roady’ or ‘back stage crew’ but I wanted to do something.  What do I do?  I work, enjoy my holidays, run my family history websites and bake!  That was it.  I’ve done quite a number of coffee mornings and run cake stalls for various charities – there was the answer.

My mum was a housekeeper in Forres, Morayshire for a Miss Kynoch, a member of the Kynoch family in Keith who had mills there.   I have her college work books and recipe books.  The cogs started working and an idea started to evolve –  a recipe book with a family history twist based on mum’s books.

‘Lizzie Riach with family and friends’ was conceived in 2011.  I asked family, friends, neighbours and anyone else I could think of for a recipe, a recipe that meant something to them.  Many of them said they had no idea what to include, my answer was if your mum said ‘what do you want for tea?’ What would you answer?

Some of the recipes came in quite fast but two years down the line I am still waiting for others. They are now all typed up and in a few weeks there will be a baking/cooking session followed by photograph session.  I have a couple of printers lined up so that I can compare production costs.  I want the book to look appealing, be of good value and interest to all who will, hopefully buy the book and help me do my turn to raise money for Macmillan Cancer Care.

If you have a family favourite recipe that you think others would like to try, you still have a few weeks to email them to me at       recipe@wakefieldfhs.org.uk

pre-order your copy at     lizzieriach@wakefieldfhs.org.uk to