While doing a little research into a Wakefield soldier killed in World War One, I came across a newspaper article that mentioned he had been a member of Wakefield Golf Club, Sandal. Finding that information was the catalyst for another diversion!

CWGC headstone logo of King’s (Liverpool) Regt., from a headstone in my collection

This morning – two lots of washing have been done, the dishwasher is going, the cats have been fed and watered and so have I! I thought a few minutes to tidy the newspaper articles, so very kindly copied from the libraries collection of Wakefield Express newspaper by a friend, and I would then start getting organised. The plan being to file each article away in the corresponding soldiers file………….did I start, well I filed one away, then I noticed one of the names of those killed in the Great War, who were members of previously mentioned golf club, had died on June 20th. I thought a small bit about him would not lead me astray too far.

George Ernest Skevington – George was one of over 100 members of the Club who served in the Great War, with 20 never coming home to their families and friends.

Who was George?  He was born in 1888 in Brough, the son of Charles W Skevington, a rural postman, born in Arlesey, Bedfordshire and his wife Annie, who was from Little Ouseburn. The family in 1891 lived at Hawthorne Cottage, Broughton Road Elloughton with Brough.

Ten years later in 1901, the family were at Hawthorne Cottage, Elloughton with Brough, the cottage now seemed to be on Welton Road.  George, was now one of nine children, the majority of which were born in Brough.

In 1911, the family were still at Hawthorne Cottage – Charles was now 57 and still a postman. His wife, Annie, was 51 and had been married 26 years, borne 11 children, with eight living to be named in the census.  George, now 23 gives his profession as ‘Pro Golf Club’ with ‘assistant professional’ written above in a different hand – it is possible that George was employed at Brough Golf Club.  Between 1911 and his enlistment in Dewsbury in the October of 1915, George  took up his position as Club Professional at the golf club in Sandal.

He served originally as 15586, in the Army Cyclist Corps., being transferred The King’s (Liverpool) Regiment, 18th Battalion and now becoming Private 57660. While George was away ‘doing his bit’, Wakefield Golf Club still continued to pay him 10s per week. George served in 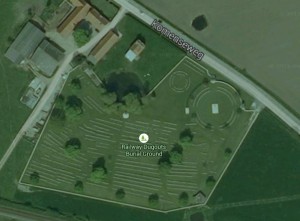 Belgium and was Killed in Action, by a shell,  on the 20th of June 1917 aged 30, and rests along with over 2,450 others who gave their lives For King and Country, in Railway Dugouts Burial 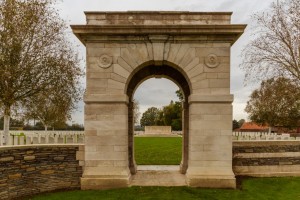 Ground, some 2kms west of Zellebeke.

The monies owing to George, from the military, were eventually paid to his father, Charles and were finalised by August 1919.  Charles would also have received George’s medals.

By 1918, a replacement had been found for George, Mr S H Lodge, from Barton-on-Sea Golf Club, Hampshire.

The Club in 2000 were able to purchase a hickory shaft putter, made by George, while he was a Professional, at Woodthorpe. 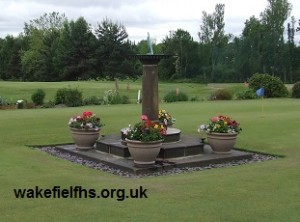 Although, George rests in Belgium, he will always be remembered as his name is engraved on the Golf Club memorial and the memorial in his home town.  The memorial on Welton Lane, Brough, not only bares his name, but also, that of his younger brother 2nd Lieut. William Percy Skevington, who died on the 8th of September 1918.  He rests in Trois Arbres Cemetery, Steenwerck, near Bailleul, France with over 1200 other identified casualties plus 400+ who are known only unto their God. William had enlisted into the East Yorkshire Regiment going through the ranks, as Sapper 62, 12423, then Private 10/111, later to become a 2nd Lieutenant.  William had entered the Egyptian Theatre of War on 22nd of December 1915.

William Percy, was not with his family in the 1911 census, he was in fact a lodger at Bosworth 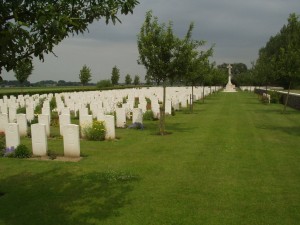 Avenue, Fountain Road, Hull – he worked as a Railway Porter.

In just over twelve months, Charles and Annie Skevington had, like so many other families, had seen two of their children killed in Action.