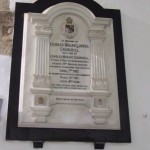 Charles joined the 3rd Battn., Hampshire Regt., in June of 1900.  He had been with M.I. in South Africa from December 1901 with the rank of 2nd Lieut and was attached to the 28th Mounted Infantry.

On 31st March 1902 The Damant’s Horse, part of Lt. Col. Cookson’s column were along the Brak Spruit and came in contact with a convoy of burghers and followed in to Boschbult farm.  The superior Boer forces attacked the column who managed to entrench before nightfall and the Boers retired at nightfall.  Charles was wounded during the day and died of his wounds on 2nd April at Klerksdorp.  His final resting place in South Africa has not been determined, but some websites say that he rests in Wimbourne.  His memorial is however, on the wall of Wimborne Minster.