In May of 2008 we spent a day in North Yorkshire – I think I’d said something like, ‘do you fancy a day out on Sunday?’.  ‘Where?’ Would have been the answer and my reply would have been that I didn’t mind.  Ben, by now would have known the places I’d been and would certainly have known there would have been a war memorial or 10 involved, with the odd churchyard thrown in for very good measure.  It was a nice day but I seem to remember a little windy in Reeth. 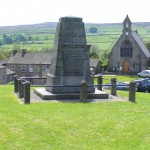 The Green in Reeth is a very large open piece of ground in the centre of the village surrounded by houses and a few shops.  The War Memorial sits proud, high on The Green, protected by small posts and a rail.  Although the structure is large, it is simple in design and bears the names of 28 men from the Grinton, Reeth and Marrick areas.

The memorial seemed very much similar to others I’ve transcribed over the years – young men who were sons, brothers and husbands but each with a simple story to tell, until…….. It came to sort out the WW2 section.  The first name of the memorial is that of Major A K Charlesworth.  I found him on the CWGC and that gave me his full name, I then went onto look at the Army Roll of Honour 1939 – 1945 and confirmed information.

But when I googled him – he had a rank and a medal, so I thought there could be a little bit more about him on the great www. Yes, there was ! A connection to Wakefield. Albany Kennett had lived at Grinton Lodge and this had been purchased with its kennels and outbuildings by Col. Albany Hawke Charlesworth, born in Stanley, Wakefield,  who had been MP for Wakefield in the mid 1890’s, having purchased the hall in the 1880’s and becoming Lord of the Manor having purchased the rights from the Crown, using Grinton Lodge for shooting.

The census of 1891 has Albany Hawke with his family living at Chapelthorpe Hall, Wakefield.  He states he is  a ‘West Riding of York Colliery Proprietor’, born Chapelthorpe, West Riding of York – the transcription of that census is not correct. The family consists of Albany H aged 37, his wife Eleanor aged 24 and daughter Eleanor aged 21 months snf 15 servants including :- Housekeeper; Ladies maid; Housemaid; Laundress; Dairymaid; Grooms; Footmen, to name a few.

The census of 1901 has the family living in Portman Square, London with Albany Hawke living ‘on his own means’ with his family and 14 servants, including :- Governess x 2 ;  Housekeeper; Hospital Nurse; House and Kitchen Maids and Footman to name a few.  The nurse would have been for Albany Hawke as he had been injured in a hunting accident.  He had Grinton Lodge adapted to take his wheelchair.

Ten years late in 1911, we have Albany Hawke with his wife and two daughter living at Brockhurst, W Didsbury and a  mis-transcribed entry for places of birth.  A H is a Colliery Owner / Director and his wife is listed under occupation as Christian Science Practitioner, with two other people in the household giving their occupation as Christian Science Teacher or Practioner, aswell, as the usual amount of servants.

Albany Kennett, seems to be missing from the 1911 census or has been mis-transcribed and needs a little more time to find him.

Also mentioned on the WW1 section is Stanley H Moore.  Stanley Harding Moore had been born in 1898 in Reeth and in 1911 his father was  recorded as being Head Teacher of the Friends School, Reeth.

Tom Was, was the son of John Thomas Ward and Louise Alice.  Tom was 1 of 7 children and in 1911 was a Student Teacher – could he have been working under Mr Moore at the Friends School?  Tom’s father John Thomas Ward was noted as being the Registrar for BMD’s and a Mine Manager.

If you can help with further information or a photograph, please let me know.