Does your town or village name have its origins in Old Norse?

The British Museum in 2014 held an exhibition entitled Vikings life and legend, although, we are now two years on from then the, online information is still accessible.

The original exhibition and the existing information was gathered and organised by the British Museum, the National Museum of Denmark,  and the Museum für Vor- und Frühgeschichte, Staatliche Museen zu Berlin and sponsored by BP.

Discover Norse placenames near you

Find out whether the name of your village, town or city has its origins in Old Norse.

This map shows all English, Welsh, Irish and a selection of Scottish placenames with Old Norse origins. In England, these are more prevalent north of the line marked in black which represents the border described in a treaty between King Alfred and the Viking leader, Guthrum, made between AD 876 and 890.

This description – up the Thames, and then up the Lea, and along the Lea unto its source, then in a straight line to Bedford, then up on the Ouse to Watling Street – is traditionally thought to demarcate the southern boundary of the ‘Danelaw’ – the region where ‘Danish’ law was recognised. In reality it may have been more of a ‘legal fiction’ than a real border, but it does seem to roughly mark the southern limits of significant Scandinavian settlement in Britain.

extracted from the British Museum 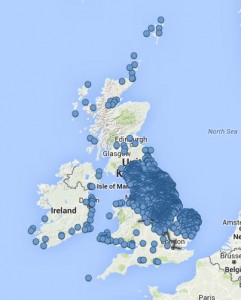 The link to the British Museum online resource has a fascinating interactive map of the UK including the Scilly Isles.  Enlarge the map, home in on your part of the country and see how many places have a Norse link. 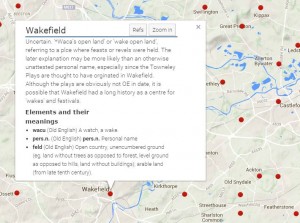 Local historians, as well as visiting the previous websites, you may also be interested in a University of Leicester project – The Impact of Diasporas.

A few years ago I was given three birth certificates to see if I could find anyone that had a connection to the people mentioned on the certified copies.

I think the reason I was given the certificates was twofold.  Firstly, I was Chair of a family history society at the time and would mention the excess certificates during my introduction at the meeting.  Secondly, I had family of the same surname as one of the certificates.

Whose birth certificates are they?

Born on 10th August 1896 at 1 West Street, Normanton.  Harry was the son of John William Wilkinson and his wife Elizabeth nee Sunderland.  John W was a Drayman working for the local Co-operative Society.  Elizabeth registered her son’s birth eight days later, on the 18th of August.

Were they mine?  Sadly, not.  I had in my tree the birth of one Harry born 1895, and a John William, but his wife did not match – his birth date also makes him too young to be Harry’s father.

The next certificate belongs to Hilda, born on the 13th of January 1899 at 14 Well House Square, Potter Newton at 11.00pm – yes she was a twin.  Walter Newill is noted as the father and Jane Newill formerly Hargrave, is her mother.  Walter worked as a bricklayers labourer.  Jane registered her daughter’s birth on the 8th of March 1899.

What happened to the twins? Did they marry?  Did Walter fight in The Great War? Did they have long and happy lives?

Family history as we all have come to learn has its trials and tribulations.  Its highs and lows. Times of great joy and if you have great joy you must have times of sadness.

Walter and Jane had seen the birth of their twins shortly after the new year of 1899, so I went straight to look for a r marriage for Hilda – no marriage.  I then looked at the deaths and found she had died in the September quarter of her birth year, 1899. 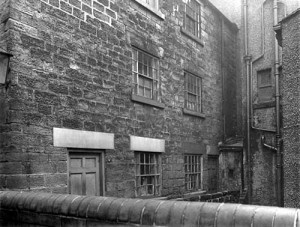 Walter however, is one of two Walter Newill’s living in Leeds, the other is his father!  Their rather smudged census sheet for 1911 has the family living at 39 Potternewton Lane, nr Leeds.  Walter is still a bricklayers labourer, while Jane is a charwoman.  Jane during her married life of 13 years, up to census time, she had given birth to seven children, of which, four had survived to be recorded in the census.

Walter jnr. fought in World War.  His Attestation Papers have been scanned and tell that Walter of 39 Potternewton Lane, was 17 years old and 59 days old and worked as a farmer. The first page of his papers is burnt, as is the rest of his paperwork, but Walter Newill is confirmed as being his father.  He was serving in the Leicester Regiment as Private 102121. Walter was 5′ 8″ in height and had a fully expanded chest of 36″.  As well as being burnt some of the papers have water damage – a result of enemy action during the next war.  But on the 12th of January 1918, Walter seems to have overstayed his leave until the 14th of January – he probably wanted to celebrate his birthday!  Anyway, he was punished by 7 days CB (confined to barracks) and deprived of 4 days pay.  While at Saltfleet on 24th of October of 1918, he again overstays his leave – returning on the 28th at 17.35hrs (4 days).  Punishment this time is 10 days C.B.

Further entries tell that Walter joined the army on the 3rd of April 1917.

Did Walter survive the war?  Yes, he did!  He married in the winter of 1920 Alice Craven in the Halifax area and seems to have gone on to have at least three children – his eldest being named John W in 1922.

Question ?  These certificates were all given to me by the same person, so is there a family link between the Wilkinson’s and the Newill’s, as they were all purchased on the same day?

Do these certificates form part of your research?  If they do let me know and I’ll send you some copies – if I send the originals, other relatives may miss out!

Having driven through Thornhill, Stirlingshire many, many times but never taking the time to stop and look around the kirkyard. Well, it was a beautiful sunny day in early November, so why not stop and pay a visit. 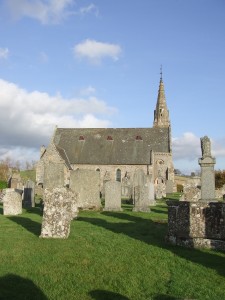 I know the village is Thornhill as I photographed the war memorial years ago, but the sign on the kirk says Norrieston.  Anyway, the car was parked a short walk away.  I grabbed my bag and my camera, walked a few hundred yards and entered by a small gate.

As a family and local historian I have always taken great store in how much information can be gleaned from a piece of stone, granite or marble.  A small glimpse into the lives of those who have gone before, but whose names are still visible for those who pass by and care to look.   Whose name is foremost on the marker?  Who remembered that loved one?  When they were born, if you were lucky, but nearly always when they died.  Some tell of occupations, abodes, and how many children may have been lost in childhood.  While others remember loved ones who have died in foreign lands and others remember father’s, sons, brothers, daughters and sisters who fought in their own way for their country.

Many years ago, when I first started researching my family history, I could not understand why women in Scotland sometimes had two names.  I now know that in Scotland a woman ‘keeps her name from cradle to grave’, and are sometimes recorded with both names, how easy is that?  For example: In loving memory of John Riach and his wife Ann Hay.    A headstone will have a husbands name and a wife’s maiden name, making looking for a marriage that much easier. Resulting in a lot less time to search for the marriage. Initially, I thought how many people just did not marry.

Anyway, back to seeing who rests or is remembered within the boundary walls of this Scottish kirk. 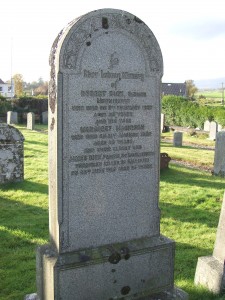 From this headstone we know  a little about Robert.  We know his wife’s maiden name. We know that James was their eldest son and he was presumed killed at Gallipoli – quite a bit of information for someone who may just beginning their family history research.

James Dick will be the main focus here. He lived at Thornhill, enlisting into the army in Glasgow.  He died on the 28th of June 1915 and the CWGC confirm this but also give details of his service number, 143, his rank of private and his place of remembrance, the Helles Memorial.  A look for James on the Army Register of Soldiers’ Effects, confirms the service number, regiment.  In addition to the already known information this web information details that James  died ‘on or since 28.6.15’ also Robert, his father, was the recipient of monies owed to his son.

Another resource available to researchers is the Medal Rolls Index Cards.  The card for J Dick, amended to James, gives details of his regiment, his rank, his qualifying service dates, theatre of war, how he ‘met his maker’ and a note for the disposal of his medals.  So, James entered the Balkans in mid June 1915 and had ‘died’  two short weeks later. 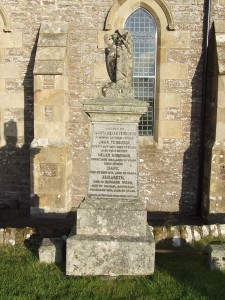 Have you ever ‘lost’ a relative during research, they simply disappear?  Then one day you visit the churchyard where the family rest and eureka! The headstone gives a clue as to why they disappeared.

This headstone did  not only give Helen’s maiden name, it also told where one of her daughters lived and died.  Another family history box ticked 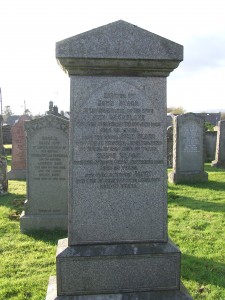 Names of crofts, villages, towns and occupations are also found on headstones thus pinning your research down to smaller areas.

Then there are headstones to whom we are very grateful to those who told the monumental mason in great detail what to include.  The family of Robert Thomas Downie chose a unique design for his headstone along with full dates of birth and death for most of those remembered upon it. 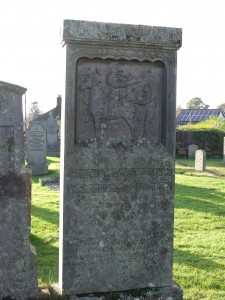 Robert was born in April of 1826 ad died in December 1886. Others remembered on the headstone in Thornhill Kirkyard are:- William Downie, Janet Gardner Downie, Wm Downie MacLaren who died in France, Janet Downie, Robert Alexander, Janet Marjorie Banks, Margaret Forrester.  Lichen has taken its toll on some of the dates but a closer inspection could solve that problem.

Wm Downie MacLaren stands out for me on the names listed.  Who was he, which regiment did he serve in and where did he die?  Firstly, William was the son of W G and Mrs F  MacLaren of Drummore, Doune.  The CWGC entry for him gives his regiment as the Canadian Infantry, his service number as 437495 and hi rank was, private.  He died on the 8th of August 1918 aged 24 resting in Toronto Cemetery, Demuin, which is in the Somme region of France.

After a pleasant walk around Norrieston kirkyard I now know a little more about who rests or is remembered within its walls.