Diary of a D-Day Veteran 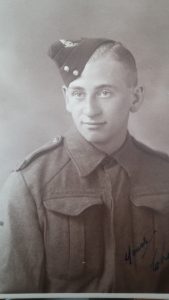 Diary notes are in italics

1st June (British evacuated Crete 1941)
A good job pictures in camp or it would be awful having nothing to do, but still I suppose we would have made the best of it

3rd June (Evacuation of British Army from Dunkirk completed, 1940)
Left camp to go to L.S.T. at docks Southampton and boarded boat 264, serial 2740, and it is miserable, nothing to do and a long time to do it in.

4th June
Rumours circulating, chat on board but no one knows what rumours are.

We sail today.  Destination unknown.  I suppose we will get to know as we sail on.  Briefing at 1600 hrs, but we have a good idea before we go.

D-Day today & What a day! Landed on  Cherbourg peninsular H+60 (minutes).  Lucky for us no enemy aircraft, the sea was enough, tore bottom off L.C.P. on ramp & no mines.

7th June (Battle of Messines began 1917)
First Battle at Cruelly.  Heading towards St Leger our final objective, going goo.  Lost 3 M10’s also we were shelled by Navy, hope never have same experience again. 8″ shells dropping 25 yards from us, awful experience. Lucky(?) pinned down by our own guns, after that straffed by typhoon.

DID YOU KNOW?  The D-Day landings had 18 operational squadrons of Typhoons

9th June
Still dug-in having a rest – not much of that for me, as am continually travelling to “B” Ech (or Bch).

10th June (Italy declared War on Great Britain and France 1941n– Withdrawal of British Troops from Norway 1940)
Don’t feel much better after hold in line. 8 solid shots keep coming over, they are spent but still they make us duck.  Canadians are taking a bashing, over on left flank, mortar action went to aid & were pinned down with air bursts and spandau

Extracted from Wikipedia
“The MG 42 (shortened from German: Maschinengewehr 42, or “machine gun 42”) is a 7.92×57mm Mauser general-purpose machine gun designed in Nazi Germany and used extensively by the Wehrmacht and the Waffen-SS during the second half of World War II. It was intended to replace the earlier MG 34, which was more expensive and took much longer to produce, but both weapons were produced until the end of the war.”

11th June (Sunday)
Relieved the Canadians to attack strong point and it was strong.  Strong enough to beath the 7th GH *** but we weakened them a lot, withdrew to C.P. and dug in or tried to. M.G fire, too thick so we kipped in a gulley for night with my raincoat for a blanket.

13th June
Withdrew a little further back and did dig in and held the Hynie(?), cushy time except for occasional spandau spray.

15th June (Battle of Piave began 1918)
Moving forward for an attack on strong point, kipping night in an old farm at Conde-sur-Seuelles and making contact in morning. Proceed 0500hrs.

16th June
Contacted him at 07:30hrs (enemy) and is he strong cannot advance down road at 88 reps.  continually firing down road and what a row it makes.  Digging in and having another go in morning.  R.E’s are going forward to draw Blockhouse which contains 88mm. Hope they succeed.

17th June
Attacked strong point and reached objective, but were beaten off with 6 Mark 6 after one tank had gone back for the night.  Lost I company and the C.O. all believe were taken prisoner. Withrew to old position and dug in.

19th June
Settling down, and finding out what we really did lose.  Jerry keeps shelling us with 105mm but does not do much damage.

20th June
Still dug in, and having it pretty easy for this Btn.  E. Yorks relieving us today.  We are reserve Batt. on flank.  We always get reserve Batt. when an attack is not going in.

22nd June
Still in reserve and start if the 10 vital days.  First to spring of T.T. Times of which I manage to get a copy for a souvenir.

23rd June
Feeling pretty hungry on compo(?) so we started to look for some spuds and we got some farm shelter, so we will be ok for quite a while.  2nd of 10 Vital Days!!

24th June (French sig Italian Armistice Terms 1940)
3rd of the 10 Vital Days and nothing much happened yet! Still in a defensive position with occasional air burst to liven things up, otherwise very quiet.

25th June
Relieved by Devons and took up move offensive positions near Boch, still quiet(?) our guns pummelling hell our of Jerry.

26th June
Still quiet and ongoing(?) plenty of firing with 3″.  Good job we use alternative position as we would probably be blown to hell out of it as he (enemy) occasionally shells some after we have moved on.

27th June
Browned off of compo so we had to look for some more food! and we found it  1 sheep slaughtered, cows milk & fresh butter and potatoes and now we are living like Lords.

29th June
1000 tons of bombs dropped on enemy tanks, Panzer Division and not one tank was left after pocket firing.  Typhoons followed up with mopping up operations.

30th June (Channel Islands occupied by Germany 1940)
Quiet day.  Discovered girl who can speak English very good, but cannot visit her after as she is far away from camp.

2nd July
Nearing the end of our quiet position, as we take over from *** Battn. shortly and are they getting some shit.

4th July
Relieved fwd Batt. quiet day, but rowdy night.  Does he (the enemy) like to lob his 108mm over.  Good job it is only occasional ones that drop in Batt area or we would be wiped out now.

5th July
Quiet day except for 1 or 2 shells one of which was dud and lane within 25* of MPHQ.  Awful night shells and spandau.  The spandau cutting the grass.  Luckily we are dug in.

7th July
LOB. What a place, lovely and quiet except for our own guns firing over our heads. Went to Bayeux for bath, and bought some cheese and it was smashing.  Went to TT concert party and came home and ate part of cheese with some hard tack.

8th July
Returned to Batt, feeling none the better for 48 hours LOB to top things off was put on guard and lucky for us the shells that were dropping were falling well forward in front of PB

9th July
Started using his (enemy) guns, 210’s but they were well behind our own RA.

10th July
Relieved by DLI .  We return to their pos.  Still quiet.

11th July
Nothing much doing.  I think that both sides are B.O.

12th July
Big attack on Caen coming off as barrage on flank is tremendous.

13th July
Took over 5 EY positions in one of old areas, but more quiet this time than before.  It looks as though it has been very rough as the hills are bare.

14th July
Occasionally retired to slit as 105 & moaning Minnies were sent over, but did very little damage, only to crops.

15th July (Battle of Delville Wood 1916)
Clashed by armoured car all down left side and taken to 3ccs and from there to MDS and then to 20 GH where I was 40 hours.

Charlie crashed into the German armoured car which was lost inside our lines, while a despatch rider – no one in the German vehicle lived.

16th July
What a life at 20 Gen.  I am all pains with laying on stretcher.  I don’t feel a little bit hungry.

17th July
Was prepared to go to beaches early on and what a redect(?) was. Have made some good friends, both in Navy and Army.

18th July
Boarded LST at 15:30 and sailing 21:00. But missed convoy and had to wait while tomorrow before sailing.

20th July
01:30 Ambulance train and it was a good journey to Woking.  When it was about 06:30 were taken off and put in an ambulance to be taken to EMS for treatment.  It’s a lovely place, nice and quiet & miles away from anything.

21st July
Still laying in bed & I am B.O, as anything on bottom of my back with forever laying on it, would b a little better if I could roll over to change position but can’t with leg being in plaster.

Charlies diary continues – he gets to know his fellow patients, the staff and has a visit from his sister who brings a parcel from the family.
He gradually starts to walk and in September, after pay day, is given a 4 day Royal Warrant.  He does not say where he goes but he does record in his diary that he has a slight accident which results in him being put back to bed. After examination the following day he is prepped for theatre.  By the end of the month he is discharged, but still in hospital as his diary tells he was promoted to Ward Seargent as all N.C.O’s have gone.

By December he is out of hospital and in Nottingham, where on the 30th of December 1944 he writes:

Dance, and got acquainted with one of the lovelist girls I ever saw.  Her name is Betty. 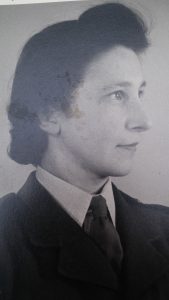 The following day, the 31st, he wrote that he’d been to the pictures with Betty, and then ‘sat out the old year nice and quiet ’round a lovely warm fire’.

Betty was my mum, Cpl. Elizabeth Anne Riach, who he married in 1952 in The Tower Hotel, Elgin, Morayshire.  The couple made Wakefield their home.

Elizabeth, known in Scotland as Lizzie and in Wakefield as Ann, died in 1982.

Charles then joined many veteran associations, becoming a committee member to many,  including The Normandy Campaign Association, The Normandy Veterans Association, The Eighth Army, The Royal Engineers, The Combined Services and many other associations.  He was also the President of the Royal British Legion in Wakefield and for over 25 years was the sole poppy organiser for the city.  He was known as ‘The Poppy Man’.

He also, with other veterans and friends attended many of the Normandy reunions.  Charles was also guest of honour onboard HMS Ark Royal when he was presented with a cheque.

As D-Day 1 veteran he attended a Garden party at Buckingham Palace along with three other Normandy Veteran Association, Leeds 61 Branch members.

When he died in 2008 his coffin was draped in the Funeral drape of the Royal Engineers and the Union flag.  His beret sat on the Normandy Association cushion along with his medals.  His branch Presidents Jewel was was draped around his beret and medals.  His funeral service was in Wakefield and was well attended with representatives of many ex-service people, friends and family.  The Mayor and Mayoress of Wakefield attended in an unofficial capacity and the Police sent a representative.  It was a day he would have been proud of especially when the Normandy March was played.

His family received letters of condolence from the Mayor, the Police, the Royal Engineers and the British Legion to name a few.

He was a generous, kind, helpful and considerate man who was well thought of by many but most of all he was my dad.