If you come from Wakefield you may not be familiar with the surname Traub. In Wakefield you would be aware of the surnames, Hoffman and Zeigler – these families were known as pork butchers with a German background.

Mr Gottleib William Traub was a pork butcher born in Germany and running his business in Batley. William as he came to be known was born in Weinsberg on the 14th of October 1863.

When William came to England I don’t know. But I do know that on the 30th of April 1892 he married Mary Elizabeth Hartley in St Peter’s Church, Morley. William at the time used his full name of Gottleib William and he told the Curate in Charge, Mr James, that he was 28 years old, a butcher, living on Queen Street, Morley. He also informed the Curate that his father was named Christopher and he was a farmer.

Mary Elizabeth was 29 years of age when she walked down the aisle to meet William. Like William, she also lived on Queen Street. Her father was John Richard Hartley and like Williams, father Christopher, he was also a farmer. There were two witnesses on that memorable day, William Kynder Smith and Marion Smith Beck.

The marriage of William and Mary Elizabeth took a little finding as the transcriber wrongly interpreted the name as FRANK.

The young couple settled into married life and a year later Henry Ralph Kinder Traub was born (1893), he sadly died in February 1900. A daughter Sybil followed and by 1901 she was five years old. The family by now were living at 62 Town Street, Batley and William was now working for his-self and he was now a British Subject.

In the Valuation list for Batley in 1910 William is listed with a house and shop at 62 Town Street, Batley. One very interesting thing for the time is that William had owned an electric motor, 2 h.p.

Another ten years passed by and the family are still at 62 Town Street, Batley. Both William and Mary Elizabeth are 47 years of age, Sybil Elizabeth B is 15 and she has a younger sister, Muriel Pauline aged nine. The couple had been married 18 years and had lost two out of their four children. We know about Henry but not yet about Alix Mary Angela who was born in January 1899 and died on the 2nd of September the same year.

The First World War came and went. Life carried on year by year until 1939 when William and Elizabeth are living at 52 Brunswick Street, Dewsbury. Sybil has taken over the role of the head of the house. She works as a Secretary to Woollen Rag Company. Her mother Mary Elizabeth is classed as Incapacitated. William is a retired pork butcher and young Muriel is an elementary school teacher.

Following on from the 1939 Register in October of that year William, even though he had become a British Citizen was still included on the ‘Enemy Alien – Exemption from Internment – Non-Refugee’ list. He must have had to attend a Tribunal as the result was ‘Exempt from internment until further order’. His Identity Book number is also included – 200516.

Sadly, although Mary Elizabeth nee Hartley, was a British Citizen by birth and parentage, at the time of her marriage she took her husband’s country of birth. So she also has an ‘Enemy Alien Card’. In the 1939 Register, her occupation is ‘incapacitated, by October on her card she is now a housewife. Mary’s Identity Book number follows on -, 200517 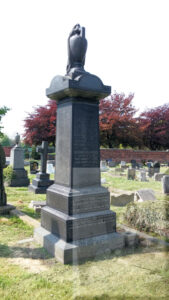 The following year Sybil Elizabeth Bohn Traub died o the 16th of January (1943) at Dewsbury & District General Hospital. Her Probate was also granted in Llandudno and again Muriel was to receive money to the value of £2305 4s 4d.

William died on the 28th of January 1944. Probate was granted in Llandudno on the 27th of March to Muriel Pauline Traub, a spinster with effects to the value of £5208 14s 3d. You may ask why was Probate in Llandudno? Due to the was much of the probate staff transferred to Llandudno for the duration. If you look on the index pages for the period 1939-1945 there are a great number of Llandudno registrations.

Muriel Pauline went on to have a long life. She died in Stockport in the first quarter of 1997. Later the 0same year Muriel’s Probate is granted. As she died in 1997 she is just outside the criteria for searching via Ancestry or FindMyPast. I said earlier that Muriel had been a teacher. FMP has her Teachers Registration. She registered on the 1st of January 1933. Registration no. 90506. After training at the Mather Training College, Manchester, Muriel attained a Board of Education Certificate. Later teaching at Whingate Road Council School, Leeds. 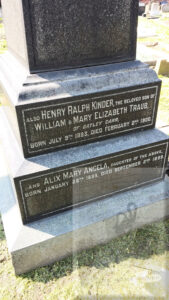 So, we now know a bit about the Traub family. But it is only the two children who died in infancy that are remembered on the Hartley family headstone which reads: In Memoriam. John Richard Hartley of Wakefield was born on March 28th 1836. Died February 16th 1874. Also Elizabeth Ann Beck of Morley. Born April 28th 1838. Died February 15th 1904. Also Frederick Leonard Beck son of the above. Born January 1st 1880. Died March 24th 1924. At Rest. Also, Henry Ralph Kinder, the beloved son of William and Mary Elizabeth Traub of Batley Carr, was born July 9th 1893. Died February 2nd 1900 and Alix Mary Angela, daughter of the above. Born January 28th 1899. Died September 2nd 1899.

Towards the end of 2021, the 11th of November to be precise, I was invited by a WFA (Western Front Association) friend to a book launch taking place at Elland Road. I didn’t know the author, but we did, however, all share a common interest in World War 1. My particular interest is in the soldiers, not the battles. So this book was right up my street. 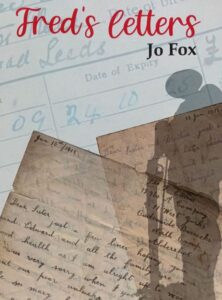 The book – Fred’s Letters by Jo Fox is an insight into the war of Fred Emms, a Leeds man who wrote to his sister from January 1915 to August 1918.

Jo tells the story through Fred’s letter and includes photographs, information on how the soldiers spent their days – either passing time or during battles. Jo in telling Fred’s story includes details on events at the time Fred’s letters were sent to his sister.

Not only do the 10 letters give an insight into a soldier’s war but also tell the reader how life and events carried on at home – home being the Holbeck area of Leeds.

To me, the battles, important to many WW1 researchers, are not as important as the men who fought. No matter what their rank or their status they were all part of a family loved by someone and part of a community that cared.

If you have family who lived in and around the Holbeck area of Leeds or is just interested in soldiers’ lives and times in the 1914-1918 time frame, give Jo’s book a try – you will not be disappointed.