And so it begins. I’ve found a soldier’s name. Don’t know where he will lead me, but let the story begin!

In Elgin’s Linkwood Cemetery is the polished granite headstone remembering the Barron family. On that headstone is a black highlighted name – William Alex Barron, my chosen soldier.

The headstone also includes William’s brother, Daniel Barron, Pte., 2629, who died at Rue Du Bacquerot, France on the 30th of June 1915, aged 30. He rests in the Royal Irish Rifles Graveyard, Laventie, France. The family had had the foresight to think about family or military historians – they added service numbers of the soldiers. Such a thoughtful family! 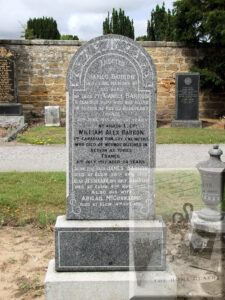 You, the reader, may wonder why I chose William over his brother Daniel? The answer is simple. Daniel served in the Seaforth Highlanders, and his service record may or may not have survived the WW2 bombing by enemy action. William served in an army whose archives were not subject to the same enemy action.

William Alex Barron, who are you?

William was born on the 15th of June 1891, the son of James Barron and his wife, Abigail nee McConnachie.

Sometime between 1901 and 1915, William ventured across the Atlantic to live and work in Canada. On the 30th of June 1915, at Niagra, Ontario, William Attested to serve in Canadian Over-Seas Expeditionary Force. Four days earlier, William had undergone his physical examination and deemed to be fit. Would you have recognised him as he walked back to his parent’s house at 14 College Street, Elgin? You may do it I tell you that he was aged around 25 and was 5′ 8″ tall, with fair hair, blue eyes and brown hair. If he had his shirt sleeves rolled above his elbow, you might have seen that William had three tattoos – one on his left arm and two on his right. He also had two vaccination marks on his left arm from childhood.

William, now Private 451024 in the 8th CEF Battalion, sailed from Halifax (Nova Scotia?) on the 22nd of November 1916 onboard SS Safonica, probably bound for England. Later he embarked for France (from England) on the 20th of February 1916.

In May of 1916, William received a gunshot wound (GSW) to his left hand and shoulder. As a result, William had been taken to the 20th General Hospital, Camiers. He was later sent to No6 Convalescent Depot, Etaples, followed by a time in Boulogne. He must have recovered somewhat as in August 1916 he was sentenced to 14 days Field Punishment No. 1 (FP1) for Drunkenness.

On the 11th of November 1916, William attended the dentist with broken dentures. By now, we are building up a picture of William – his tattoos, vaccination scars along with his war scars to his hand and shoulder. Thanks to his Canadian Service Records we know he had some false teeth!

The 18th of January 1917 was a new start for William, he had recovered from the injuries to his hand and shoulder and subsequently transferred to the 2nd Canadian Tunnelling Company.

In June 1917, the company began working on deep dugouts and mines in the Ypres Salient in preparations for the Battle of Messines. This battle was the beginning of the much larger Third Battle of Ypres (July – November 1917).

On the 30th of June 1917, in the Field, William had been appointed Lance Corporal – with pay.

The 30th of June 1917 was a day his family would remember, not only had William been promoted, but he was also wounded.

William received a gunshot wound – a spinal injury to the cord and noted as being severe. After undergoing immediate medical care at No 3 Canadian Casualty Clearing Station. On the 7th of July, William, dangerously ill, was taken aboard HS (hospital ship) Princess Elizabeth bound for England.  The medical staff of HS Princess Elizabeth consisted of three British Officers.  One Warrant Officer, three nurses and sisters plus 27 RAMC and/or St Johns Ambulance members.  There was the capacity for 30 cots plus walking wounded.  Her capacity was quite small compared to other hospital ships.

William upon arrival in the UK was admitted to Dover Military Hospital. In Williams records, there is an assessment of his wounds and overall condition. His Medical Case Sheet is easier to read:

On the 11th of July 1917, William Died of Wounds. One comment on his records says ‘exhaustion’.

William was later taken ‘home’ to Elgin and he rests with his parents and sister, in Linkwood Cemetery.

I’ve told you so far about William’s service and death but there are other wonderful documents within his service records. One is a general card that gives an address for his father – 10 Losse Wind, Elgin. Another card has another, earlier address – 10 Union Street, Elgin. Then there is William’s Will attached to a Form of Will document. Written on the 1st of March 1917. William bequeathed all his estate to his mother, Abigail, of 10 Lossie Wynd, Elgin (the correct spelling, this time!). The witness to William’s will was 503267 Private J W S Normington, 2nd Tunnelling Company of Saville Park, Halifax, England.

“451024. William A Barron, 58th Battn. Military Will. In event of my death I bequeath all my money to my mother Mrs Abigail Barron 10 Lossie Wynd, Elgin, Scotland. The amount which is £5 10s from the 1st day of January till the day of my death. After her death to my sister Mrs J Dunbar(?) 7 West Park Road, Elgin, Scotland. Signed William A Barron, Pte 58th Battn. February 19th 1916.”