While on a ‘FAMILY HISTORY’ holiday in Scotland last year I visited many of the cemeteries and kirkyards where my relatives rest and photographed their headstones.  While in these cemeteries I also photographed a large number of headstones with either a military connection or some wording that made the memorial interesting.

In Linkwood Cemetery, Elgin is a headstone quite close to where I had parked my car. The headstone remembers people belonging to the Logie family. 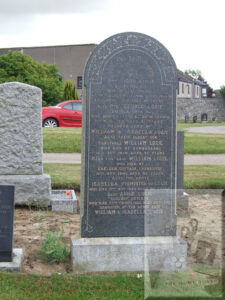 Who is mentioned on the granite memorial?

I’ll start with George Logie for no other reason than his name was more prominent than the others.

After enlisting in Elgin, George served in the 2nd Seaforth Highlanders as Private 2604 and 265914. At some time in his service, George must have changed his battalion to have had two service numbers. This is verified by his medal card, which also confirms the awarding of the British and Victory Medals. As there was no 1914 or 1915 Star in George’s medal entitlement he must have joined the service after 1915.

George’s father was William name was struck through and his mother Isabella (nee Phimister) becomes the next of kin and eligible to take over the small pension. The family address at this time was Waulkmill Cottage, Elgin. The collection of Soldiers Effects tells that George’s father was eligible to receive two sums of money, £13 followed two years later by the sum of £20.

George rests in Vis-en-Artois British Cemetery, Harcourt, France with over 850 other casualties of war.

George’s family had a personal inscription placed upon his CWGC (Commonwealth War Graves Commission) headstone, which reads:- For Freedom’s Sake”.

Now, let me tell you about John.

John born on the 11th of April 1899,  had five brothers and six sisters and, like his brother George, was a ploughman.

He enlisted at Inverness on the 11th of June 1917 and served in France. After being wounded on the 25th of April 1918, he was taken to CCs (Casualty Clearing Station) 68, France. John, aged just 19 years old, died the same day and rests in Mendinghem Military Cemetery, Belgium, Plot X C 14. His headstone, one of over 2000, has the familiar CWGC cross on the headstone and the words ‘He died that we might be free’.

There is a Pension Card that has information on the two Logie brothers. It tells the brothers names, Regiments, Service Numbers, their causes of death and dates. One snippet of information that is a boon for family historians – that is that William, their father, was next of kin, he died, his information was struck through and replaced by Isabella, their mother.

William and Isabella not only lost two sons in what was to become The Great War, shortly after in October 1920, they also lost their son William.

According to the 1901 census William appeared to be the eldest of nine children ranging in ages from William aged 12 to Charles just one month old.  The previously mentioned George and John were three and one years old.  William had been born at New Spynie but now the family were living at Linkwood Cottage, Lhangbryde.

William was a Police Constable and died ab Cambuslang.

The Sunday Post of Sunday 17th of October 1920 tells:-  “Impressive scenes were witnessed yesterday in connection with the funeral of Police-Constable Wm. Logie whose death occurred at Cambuslang, where he was stationed.  Comrades of the deceased officer in uniform proceeded the hearse as the cortege passed through Cambuslang”.

According to his death certificate, yes I gave in to curiosity and paid my six credits to view how he died.  William died at 10:30 pm on the night of October the 17th 1920 of Pernicious anaemia.  According to Libindex, he left a wife, Mary Clunas