Barnsley Pals Colours before and after conservation

I am the volunteer co-ordinator of this ongoing project and I am liaising very closely with Reverend Canon Stephen Race and the PCC for St Mary’s Church in the centre of Barnsley where the King’s Colours are laid up.

In November 2016, Conservators inspected the two Colours to report on their condition and take photos, which were used last year to commission replica flags. The replicas were blessed in a special service for the Armistice Centenary. They are being used by us on 2 June and this year’s Remembrance. They will also be on display for the Heritage Open Days as St Mary’s is participating this September for the first time.

We are willing to lend them to groups and organizations for relevant events free of charge. I have produced an agreement for this as the York and Lancaster Regiment Association borrowed them for their Commemoration on 12 May when they donated two special benches at Silverwood Scout Camp (originally Newhall Camp where the Barnsley Pals were billeted and trained).

We hope to produce an educational pack for schools to borrow them at a later stage but will need to find someone interested with the appropriate skills and experience in addition to fundraising to pay for it.

My research into the history of the Colours was published at the end of last year in a 50 page booklet with lots of old photos, designed and printed by Pen and Sword to support our project. Copies cost £5 and I am donating all proceeds to this project. (Copies are available from Sheffield Cathedral shop, Clifton Park Museum shop in Rotherham, Experience Barnsley shop, various other outlets in the Barnsley area and myself. Booklets can be posted @ £2 for post and packing). 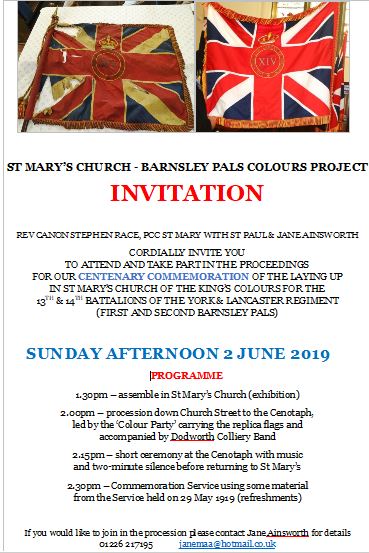 We are currently fundraising to frame the two King’s Colours and relocate them back to the War Memorial Chapel were originally laid up, with proper interpretation. (We have permission from the MoD to do this). We also need to conserve the six panels listing 200 men (and one woman – the only one on a WW1 Memorial in Barnsley I am aware of) on the impressive War Memorial Pillar as some of the names have almost worn off.

As and when all the necessary funding is in place and the work is completed, we will hold another special event. I’ve submitted some applications for grants but if other individuals or groups are interested in making a donation this would be most welcome and they can contact me for details.

St Mary’s Church will be open this year for the first time for some of the Heritage Open Days.