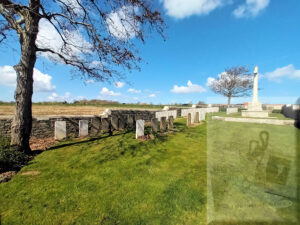 While on a long-awaited visit to my beloved ‘bolt hole’ in France I took another walk – a ten-minute walk down the road to the CWGC Bleue Maison near the Commune of Eperlecque. I’d been there many times and at one time had photographed all the headstones and later blogged about some of the young men who rest there.

This time though, I’d left the hard drive with all my photographs at home but the short walk down the road on a nice day was very pleasant.

In the cemetery are quite a few Royal Engineers and Cameron Highlanders with the odd other regiments and Canadians thrown in for good measure.

The cemetery covers the period 1918-1919 and sits between the main road through one of the centre villages and the back road to the main village.

On this visit, I only photographed a few of the headstones – one with an unusual name or something that I thought would make research easy. A Canadian headstone would certainly do that but there was one British grave that stood out not only by the surname but by the regiment. One soldier, a captain by the name of Ronald Newton Caws of the Gloucester Regiment had been awarded the Military Cross but due to his rank I knew his service record would be only accessible via the National Archives, I gave him a miss and settled on E E Setchfield, Private SE/7275 in the Royal Army Vet. Corps., who died on the 19th of September 1917. The date I noticed was before the date carved into the boundary wall of the cemetery. 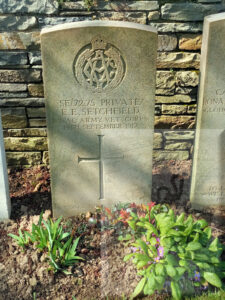 Anyway, back to E E Setchfield. I like to add meat to bones and find out who these men were before they served their King and Country. The Forces-war-records website has three entries, each providing a little more information as to E E’s full name. It is the latter of these that not only give a full name – Edward Ernest Setchfield but also additional information that could help find him in the census and other records.

Edward, according to the record, was born around 1980 in Emneth, Norfolk and served in the No. 2 Mobile Vet Section.

In 1901, Edward was 20 years old and living with his parents, George and Mary and a younger sister, Maud. There is quite a gap between Edward’s and Mary’s age, so there may have been other children in between. Edward was working as a bricklayer at this time. Later this year Edward married a young lady called Rose Adamson in the Wisbech Registration District, but probably in Walsoken, Norfolk – where he is living in the census.

Ten years later Edward and Rose are living at 40 Elizabeth Terrace, Wolsoken. Rose and their two children, Hilda and Mabel, were all born in Wolsoken but Edward seems to change his place of birth on each document. Now he either didn’t understand the question or maybe it was ‘where are you from?’ This could mean the last place he lived or where he was born depending on how the question was understood. If the question had been ‘where were you born?’ this could have been the actual place. But all the documents seem to have listed his previous village as a place of birth. A tad confusing for those new to research.

Edward enlisted in the county town of Norfolk, Norwich and by May 1915 was in France. With only doing a quick search I can’t seem to find much about the No. 2 Mobile Section but at some time they must have been around the St. Omer region of France. The area has vast tracks of canals that were dug out many, many years ago and are known as the Marais. A wonderful place to visit and enjoy a guided tour on an electric boat – a slow tour as there is a strict limit on boat speeds. In the clear water, there is plenty of fish. and the air is countless dragonflies and birds. Ernest, as we know died on the 19th of September 1917 – he was not KIA as his entry simply states DIED. How did he die? His pension card indicates he drowned by accident while on AS. I can be a little more specific in this as the Roll of Honour website tells that Edward drowned whilst fishing. Could he have been fishing in the wide canal at Watten or one of the sections that are more like a maze where you could easily get lost?

It took a week for the notification of his death to be received by the authorities and even longer for Rose to get the money from the Army. Rose also was to receive money for two children – Hilda Mary born 31 July 1902 and Herbert Edward born 8th of February 1913. There is no mention of Mabel who was a month old in 1911. 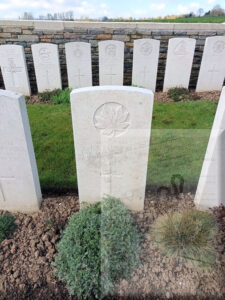 In total contrast to Edward, the second soldier to be named in my ramblings is F S Stewart of the Canadian Army Service Corps, 2nd Canadian Aux. HT Coy. According to the CWGC F S Stewart is Fred Sidney Stewart served as Driver 2114941 and died on the 9th of September, 1918 aged 22 years of age.

Fred was the son of Adela and Donald Stewart of 38 Toronto Road, Buckland, Portsmouth. He enlisted in Calgary. Canada on the 4th of January 1917. And unlike many of the British WW1 Service Records the ones for Australia and in this case, Canada have survived. There is so much information to be learnt from such records including wills, soldiers’ movements and something I find most fascinating – a description. So the 38 pages can tell a great deal.

At the time of his enlistment, Fred was born on the 31st of March 1896, giving his address as Gen. Den. Calgary. His family were living in Portsmouth, Hampshire and from passenger records, Fred, a teamster, could have travelled to Canada around 1915-1916.

At 5’7½” in height, Fred was reasonably tall for the time. He had a fair complexion, hazel eyes, and black hair and weighed in at 138lbs.

On the 26th of March 1917, Fred left Canada and disembarked in Liverpool on the 7th of April from SS Metagama and was taken on strength at Shorncliffe. On the 9th of August, he left the UK and arrived in Le Havre the following day as a reinforcement. The following months are detailed as to his whereabouts including 14 days’ leave on the 2nd of March 1918. Rejoining at Caestre (between Hazebrouck and Steenvoorde). At midnight on the 27-28th May 1918, his status was changed to No2 Canadian Army Aux. (Horse) Coy.

On the 9th of September 1918, Fred was admitted to 36 CCS and died the same day of Phthisis due to active service conditions. Currently, Edward and 58 others rest in Bleue Maison CWGC in the Commune of Eperlecque.

The base of Fred’s headstone says ‘Until we Meet’. 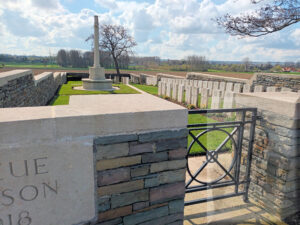