We all need friends, and sometimes family history friends are just the best! Don’t you agree?
Christmas time, we either post Christmas cards or hand-deliver. While delivering one such card to a family history friend I was handed a little wooden cross. The cross no more than six inches in height has a story to tell, but that will have to wait. Following a cup of coffee, I was then handed a small book. 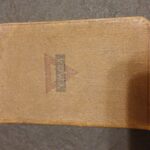 The book had the logo of the YMCA on the cover. The once red upturned triangle now faded as is the blue bar that sits over the triangle and includes the words YMCA. It is old but how old?
It didn’t take me too long to open the book and find out.
Written inside was the date 25th Aug. 1914. The Aug could at first glance be mistaken for May, but it is Aug. The date of 25th May would be too earlier to match in with the rest of the information. What information?

The inside cover has the wording ‘Lord Robert’s Message’ with the following words ’25 Aug 1914. I ask you to put your trust in God. He will watch over you. You will find in this little book guidance when you are in health, comfort when you are in sickness and strength when you are in adversity. Roberts.’

The words are not always clear and easy to read as they look handwritten and probably are or is it facsimile writing  I know for one, that if I was handwriting an inscription in several books my hand would be unreadable after a couple. Another question now rises – Who was Lord Robert’s? Maybe later! But now back to the little YMCA book.

I always look into books, especially older books, you know what I mean. Bibles, Prayer Books, Sunday School and School prize books and so on as they can and sometimes do, have names and dates and if you are very lucky, an address. On this occasion was I lucky? Yes, I was lucky!

What do we know so far? There is a YMCA pocketbook given to a soldier in or after August 1914 by Lord Roberts. The pocketbook is the four gospels – Matthew, Mark, Luke and John. So far so good.

My luck was in as a name and address are written in pencil. Extra luck also included a place where the soldier was at one time during his service.  Who was the recipient? P Auty? Who is he, was he?

The first stop on the hunt for P Auty was Ancestry. Not many to work my way through, however, nothing to confirm who he may be in the 1911 census. I did forget to mention that included in the pencil written words was this person’s service number – another bonus but Ancestry didn’t come up with any ‘hits’. A search of FMP also had no results. I then tried ForcesWarRecords – not a site I use a great deal, as 99% of their information is found elsewhere. This time, however, using the service number it did good! The Service Number M/335469 belong to a P Auty only this time the ‘P’ became Phineas. I had found my young man. Just to add a little more info. in the 1911 census, there was another young man in the family, his name was Paul. There needed to be some confirmation as to whether the book belonged to Phineas or his brother Paul.

Phineas was born at West Ardsley to Jonathan Auty and his wife Eliza (later documents have him being born in either Castleford or Pontefract). He was baptised in All Saints Church, Castleford the 6th of December 1881. There is an online family tree with a birth date of 1st of May 1880 – which means he should be included in the 1881 census. The GRO has a birth registered in Wakefield in the 2nd quarter of 1880 – this does tie in with the birth included in the online tree. This information doesn’t match with the 1881 census as no Phineas is included with the family living at Lock Lane, Allerton Bywater. The first appearance of Phineas in a census is the very faint scan of the 1891 census when the family are in Castleford.

The 24-year-old Phineas can, however, clearly be found on the 1901 census living in Baumber, Lincolnshire, with William Greaves (a shepherd on a local farm) and his family and working as a Stable Lead (Groom) – a couple of other Stable Lead’s are also with the Greaves family. Baumber is a small rural community that in the 2000 census had a population of 168.

Following on, the next census in 1911, Phineas is back living with his parents and siblings at 3 Nutt Street, Pontefract. Who was in the house on census night? Jonathan aged 65, still working as a coal hewer. Jonathan’s wife Eliza aged 63. Phineas is the eldest child living at home. He is now 30 years old and employed as a groom, employed by a veterinary surgeon. Margaret Annie Auty a daughter-in-law, aged 34 had been born in Barnard Castle. She had been married five years and had one living named Florence Xenie, but had sadly lost a child, who I later found had been named Paul.

Margaret Annie had married Phineas Auty in April 1905 in Pontefract. Phineas and his wife at some time in the previous two years had lived in Scotland. A visit to Scotlandspeople provided a birth entry for Florence Xenie. She was born on the 24th of December 1909. The Scottish information also gives her time of birth – at 6h 47m p.m. in West Barns, Dunbar. West Barns is a small village in East Lothian, some 10 miles south of North Berwick and 28 miles east of Edinburgh. Another tick for Scotlands documents also includes the maiden surname of the mother and the date and place of their marriage. In this case Burney Margaret’s maiden name. The marriage is included as of April 19 1904 and should be according to English church records 1905.

When trying to work a timeline as to when the couple were in Scotland. I know it must have been after 1905. Why? The couple married in 1905. Their son Paul Rowland Auty was baptised in May 1905 and sadly had been buried by July. This leaves a window of Autumn 1905 to December 1909 when Florences’ birth was registered in Haddington. Arriving back in Pontefract before census night 1911.

I mentioned earlier that ForcesWarRecords gave me information about Phineas’ war service. His service number was M/334569 but I didn’t mention he served with the Army Service Corps (A.S.C.). There is no surviving Service Record for Phineas so when he enlisted is unknown.

Could it have been early on in the war? Lord Robert‘s died in November of 1914, so either Phineas obtained a book before November or Lord Robert had written many books ready to hand out?  Lord Robert’s visited the troops in France and it was there that he died aged 82 in November 1914 from pneumonia while visiting with Indian troops near St Omer.  His body was then returned to the UK before being buried in St Pau’s Cathedral.   For information – Lord Robert’s and one of his sons were one set three of father and son’s to be awarded  the Victoria Cross.  His son The Hon. Frederick Hugh Sherston Roberts, VC was killed in action during the Boer War in  1899. 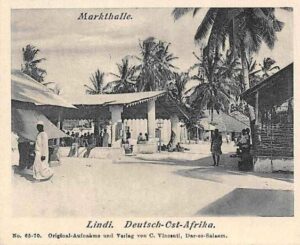 What is also written in the book gives a clue to what happened to Phineas in 1917. Dec 25/17 is written with the following address – South African Stationery Hospital Lindi German East Africa.  This part of what became known as The Great War was fought in a series of battles and guerrilla movements.  The campaign had all but ended in November 1917. 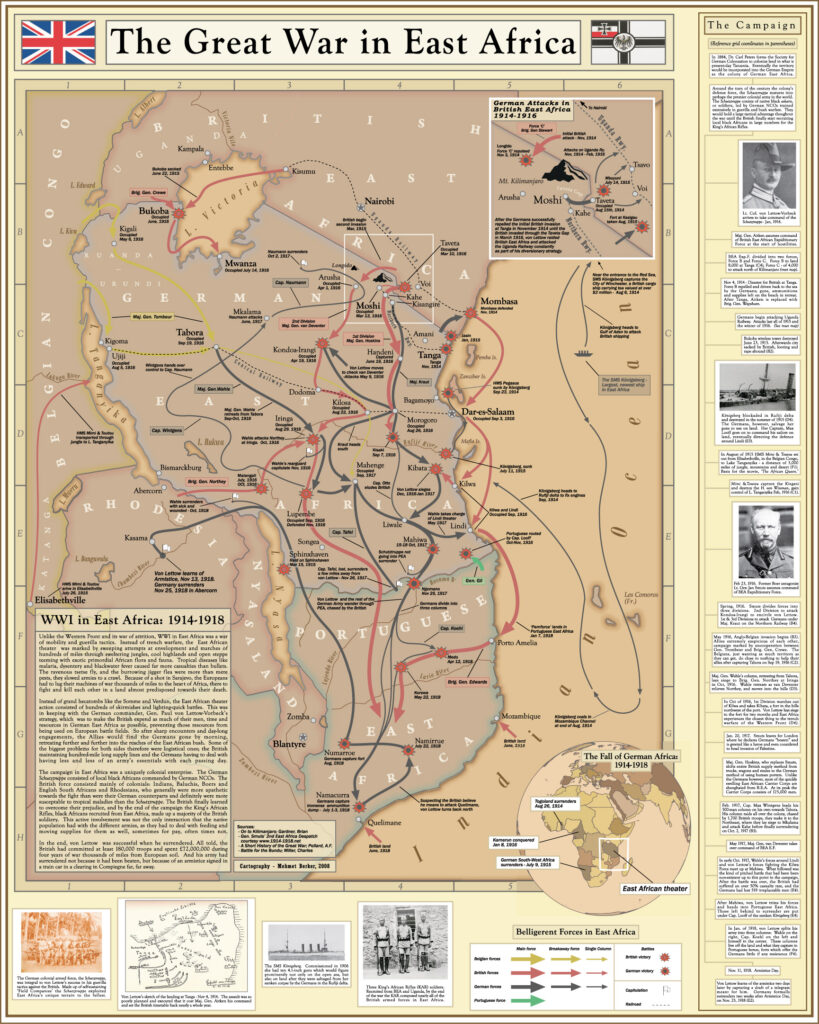 The War in German East Africa via Wikipedia

Had Phineas been injured?

He, according to Fold3 had been granted a pension after being discharged on the 17th of January 1917. What the pension was for is unknown but he had a 20% degree of disability and for that was awarded a Pension on a conditional basis – was his medical condition hoped to improve. Anyway, he was awarded on 9th December 1920 the sum of 8/- for himself and 3/6d for his wife and child weekly. In June of 1922, according to the military, there were no grounds for any further payments. Had he regained his fitness and was now able to work? Or, had the military decided he was fit anyway? But he did come away with the Victory and British Medals! 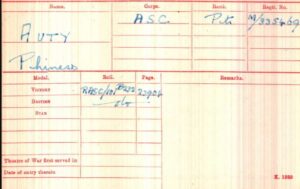 Phineas died in Pontefract Infirmary and was buried in Ackworth cemetery in September 1938. His wife, Margaret was living in Hemsworth when the 1939 Register was taken. There are two redacted entries for the same household. Could one have been Florence?

Finally, the back page in the YMCA book is written by Florence on January 29th (no year) but she did live at Low Ackworth and I presume that this was done in her younger years.