Nelly Spindler, a Wakefield girl, who nearly 100 years ago was one of the Queen Alexandra Imperial Military Nursing Service.  She was a young woman, a nurse, who served so close to enemy lines she  almost stood on them! 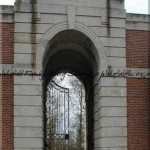 Nelly was born in Wakefield in 1891 to George and Elizabeth Spindler, the eldest of their children.  George was a policeman, serving in the Wakefield City Police Force.

By the time of the 1911 census George was now an Inspector in the City Force and ‘our’ Nelly was a hospital nurse living on Park Lane, with the Matron as head of household.

Nelly, like many other women from the area watched as young men signed up for King and Country – they had heard the call but there was also a call for women – a special type of women, specialists in their field, yes,  nurses.

Nelly answered the call and joined the QAIMNS who were mobilised very shortly after the BEF left.  These nurses initially numbered 3,000 but soon rose to over 20,000.  These young women went where ever there was a wounded soldier – in all theatres of war and in all kinds of danger.   Nelly worked at the 44th CCS (casualty clearing station) Brandhoek, Belgium.

The 44th CCS had expertise in abdominal wounds which needed immediate attention due to the amount of blood loss, high infection rate and high mortality rate.  The first day of the Battle of Passendale saw the 44th CCS overwhelmed with casualties.  Not only were they an ever growing line of casualties needing attention but the CCS was also being bombarded by enemy shells.

Sadly, her name is nearly forgotten in her home town, it is only the family/local historians and military researchers who know of her and her fellow nurses whose final resting place is in a foreign land that shall ever be British.