The previous blog was about naming traditions, so I thought I would follow on with nicknames. 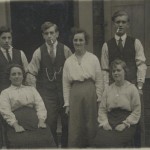 My aunty was called Dolly or Do-do, but it was not until I was nearly a teenager that I found out she was really called Frances – I still can’t work out why she was called Dolly. She was always a Dolly but to me she was aunty Do-do and very much loved.

So, why an I putting pen to paper or fingers to keyboard?  Well, to suggest a few other names that Margaret or Pauline or Caroline might have been known by and therefore found on documents, census etc.

Imagine, it is the night of the census in 1871 (UK) and the enumerator comes to your home – it’s a good job he came and did the writing as you can only ‘make your mark’.  He enters your house, your husband is out and there is you with your children and your grandchild.  Mr Jones, the enumerator, asks who lives here.  You say there is your husband Jack.  You come next as the wife, so you say Jane.  Your children are next, John, George, Rosie and ‘our Aggie’ and ‘little Isa’.

You answered the enumerator, he did his paperwork and off he went next door.  But who really lived in your house?

Here is where it gets tricky!  The husband Jack, was really John – Jack being a familiar for John in certain areas. Jane  and George are easy, but Rosie is Roseanna, ‘Our Aggie’ is really Agnes and ‘Little Isa’ is Isaiah – confused yet?

When searching for your family in the census and documents remember, not everyone used the name they were Registered with, or Christened/Baptised with.

Many years ago I put my Riach line on hold as I had a choice of fathers for one family – the dates were a year out, not too disasterous, the place was the same but the names were Patrick and Peter, until some kind person informed me that Patrick and Peter were one in the same, just like Jack and John – easy when you know!