After trying to arrange a visit for a few weeks and work always getting in the way I finally got there!

Did I enjoy my visit ?  Was I disappointed ? Wait and see !

Firstly, the museum was reasonably easy to find and we only went twice around a roundabout once – I must add I was not driving and the front passenger did give good directions and in plenty of time – I say no more!

The car park was larger than I expected with enough pay machines BUT I was disappointed that people with a Blue Badge even had to ‘cough up’.  One thing I did like, but did not seem to be well advertised was a cabin, a wooden hut that gave change – a good idea.

The building seemed strange, not because it was modern and industrial but seemed lifeless, now was that a play on the subject within, I don’t know.  We entered via a large tower, at the time seemed pointless and a waste of space and money – we were peering through the slatted sides of the tower as we went in and it seemed one big void.  On entering we found it was basically a lift shaft to a viewing tower and a charge of £1.40 was made for the journey to stand over a chasm – not flippin’ likely!  Passed the lift ladies have their handbags searched, yes, for good reasons, but why only women and why only handbags?

Although the museum is free entry you are still funnelled via a ticket machine and a little persuasion is made to purchase a guide.  Ticket entry via a turnstile would be ideal, you would still get a ticket, they would still know how many people are in for fire regulations, you would not be badgered into buying a guide (unless you wanted one) and on exit you go through a similar turnstile – at the moment you are ticketed, counted on the way in, but there is no count on the way out – does not seem right when fire regulations come into it

Mini moan over, we entered the museum which is on the 1st floor.  Well, as we entered the first hall my companion and I decided the outside matched the inside – it was claustrophobic, even though the hall was very high, oppressive and depressing.  I’ve been in many military and war museums over the years and never felt this on entering.  Yes, war is a harsh subject but never have I felt this on entering a museum before, even a modern museum.

A Harrier Jump Jet was the first thing we saw, mounted in mid air – what a wonderful thing to greet you, they always seemed larger in flight.  The halls were very spacious, only the tank, a Trabbant, and other large displays on the floor – still leaving a very large amount of open floor space.  The main exhibits were in cabinets within the walls and for the amount of space there was not that many. 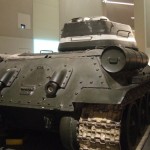 The cabinets did hold some fascinating artifacts for example: – A souvenir In Loving Memory of the women and children killed in an air raid on London on June 13 1917, War Bonds and one or two cabinets dedicated to people with a definate story.  I’ll blog about those later. I was surprised that how much wall and floor space there was there did not seem a great deal of artifacts on display.  I could have spent time spelling what it was like in the trenches, what wet smelly socks smelt like or what a lot of men together for a long time with no where to wash or limited facilites also smelt like – that was one for the kids as were a lot of the displays.

While we were in the main hall a visual display started and the already dimly lit room went virtually dark apart from the illuminated images on the walls and the slide show.  If you only wanted to listen to the slide shows description, walking around without tripping over someone who was sat down or just standing around was a task.  The darkness also made reading any description in and around the displays a waste of time.  When the lights came back on it was done quite gradually.

The museums history of war started with WW1 and went up to the present, with a special display telling of the fantastic work that war correspondents do in time of conflict.  One of the displays in this section was for want of a better word a chart showing how many journalists from all over the world have had their lives taken by the very thing they wanted to tell the world about. 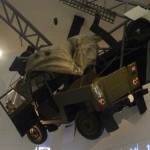 Time to check out the café! Yes, it was lunchtime but the queues were reasonable apart from the picnic section and one lady with a hoard of children who could not make up their mind.  Overtaking them and going straight for the kill – coffee and cake, the prices were reasonable and the portions very good.  The pork lunch served with all the trimmings was very good value and looked fantastic.

Yes, I bought a book, again that information is in another blog, but I also bought two other items, but can’t tell you about those as they are ’stocking fillas’ for christmas.

The shop had the usual bits and bats for children and then some very nice memorabilia, gifts and some wonderful jewellery made from buttons in all shapes, sizes and colours – so unusual and very retro.  After this I, we, homed in on the WW1 books but we were both disappointed in the small display.  The sections for wars post WW1 was far better, but not really my or my companions main interest.

Would I go again to the Imperial War Museum in the North, I don’t think so; next time will venture to the original in London.

If you do wish to visit a wonderful place full of interest and packed with information, artifacts and displays that suit children, military personnel, veterans and those with an interest in all things military,  visit the Royal Armouries in Leeds.  On the various floors there are good displays from all over the world – from the UK to India and Japan , from times gone by to modern warfare and policing – go on pay it a visit.

To see information about the Imperial War Museum click here

To see information about the Royal Armouries, Leeds click here

To see information about the Royal Armouries, London click here