What a quest to find the memorial in the village.  Before my visit someone had said they thought it was in the church.  In the village shop, and on this occasion I am not ashamed to say I spoke to two ladies, who were both convinced there wasn’t one but disagreed as to where it was.  I was told to go the the Motor Museum and ask there.  The wonderful local chocolate shop at least were honest and said they should know but didn’t.  Not one to give up I spied a lady walking across from the village school with arms full of baskets – this wonderful person said ‘yes, follow me’.  So less than 20yds off the road there was the memorial – so thank you, who ever you are!

One name seems to stand our more than any other on the Beaulieu War Memorial, could be because it is the longest.

In 1901 the family were living at The Hall, Holbrook, Derbyshire.  The family consisted of Francis and Mary and their children Robert B aged 6, Stanton aged 4 and Francis E aged 2 along with 4 servants ranging from parlour maid to nursemaid.

2nd September 1914 Stanton was one of the gentleman being appointed Probationary Second Leiutenants. 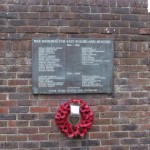 March 1915 Stanton is noted in the Gazette as being granted the temporary rank of Lieutenant.

Stanton served in the Royal Marines, Royal Navy Div.  He was KIA during the battles of Gallipoli and died on 14 July 1915 being remembered on the Helles Memorial along with nearly 21,000 other identified casualties.  The memorial at the moment (2012) is undergoing major renovations after years of severe weather conditions and seismic activity.

The family seem to be from the Derbyshire area, so where is the link to Beaulieu ?     Well, found a link to the Lymington area – Francis S Wilmot-Sitwell died in the Lymington Registration District in 1929.  There is also a death for a Mary in Christchurch but will shelve that one until further proof comes my way.  Just as an afterthought I looked up a Probate entry for Stanton and the entry tells that Probate was granted in 1920 at Winchester.  The Lymington war memorial has no mention of the Wilmot-Sitwell family, so why the Beaulieu memorial?

Plantagenet Roll of the Blood Royal