A few years ago I sorted through all the family photographs and put them in family folders. There were lots of people I knew – aunt and uncles, family members, family friends and lots of people who were totally unknown to me.  Some of the photographs, mainly from my mum’s time in the war had a short sentiment followed by a single name, others bore no wording.  Why should mum right on the reverse who they were – she knew them!

My dad also had photographs, not so many, but they also had either a few words or nothing.

In a moment of frustration of trying to find out who these people were Who Are You? was born. 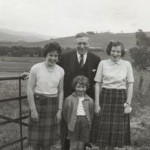 The pictures were scanned and then put into an online photo album with as much information about the picture as I could find on the reverse or deduce from the image.  I was loaned pictures, begged pictures, scanned them all and indexed them – cross referencing them if I knew they were from one place but the photograph was taken elsewhere.

All in all there are pictures of unknown and known people from the British Isles, Canada, America, Ukrkaine, Africa and a section of WW1 & 2.

Just to give you an idea as to some of the pictures – there is a family photograph in the Morley section of a couple and a small child written on the reverse is ‘ Aunt Mary ‘ but, who was Aunt Mary ? Is she the lady or is she the child ? Other images from the Morley section include members of the Donkersley  Worrel, Kershaw families  – most of the Morley photographs were handed to me as one group, so therefore I have kept them together and linked to other sections, but a photograph of a young man taken by Chas. A. Saylon, photographer, S. E. cor. Sixth & Penn Sts, Reading, PA. ( or South East corner of Sixth & Penn Streets). Who is this young man ? Was he visiting family or did he live in Pennsylvania ?

This section of my site Wakefield Family History Sharing has not been available for a while, but is now available and shortly with have the addition of extra pages with a connection to Victorian and Edwardian photographers.