Who was Pioneer Briggs and what has he done or achieved to make have an entry in the local newspaper?

Pioneer Briggs, was according to the parish registers of St Michael, East Ardsley, the son of Christopher and Mary Ann Briggs.  The registers also tell that he was baptised Haydn Harry on the 2nd of May 1897.  The family at the time were living on Cave Lane, East Ardsley.

A few years later when the census enumerator came to call Christopher told him he was aged 40, from West Ardsley and working as a Railway Engine Driver. He was the husband of Mary Ann aged 39, who came from Bowden in Cheshire.  The couple were parents to five children aged between 17 and four, the four year old being Haydn.

Ten years later, Mary Ann was a widow, who had given birth to seven children, with six living to be counted in the census.  Home was now Old Hall Farm, East Ardsley.  Her occupation now being given as farmer.  Her two eldest daughters were elementary school teachers. while the boys worked on the farm.  The farmhouse boasted ten rooms – not including the kitchen, bathroom scullery or landing.  Haydn Harry was now 14 years old, a teenager, but in a few years time he would have to become a man! 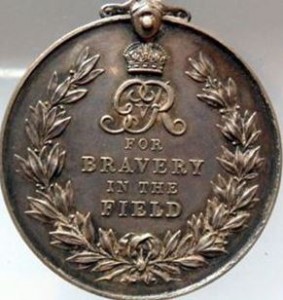 East Ardsley Soldier’s Gallantry – Pioneer H H Briggs, Royal Engineers, youngest son of the late Mr Christopher Briggs and of Mrs Briggs, The Hall, East Ardsley, has been awarded the Military Medal for conspicuous gallantry during the months of July and August.  Prior to enlisting he was employed as a fitter at the Great Northern Railway sheds, Ardsley.  He was twenty years of age, and  attended as a boy the local Council School.  His elder brother Fred, is serving in the Royal Flying Corps.

The next question is did Haydn and Fred make it through the war?  A look though the CWGC website revealed no entries for either brother, but that could be due to a transcription error – no transcriber is perfect! No record of Haydn’s death in the surviving military records or a record of any medal awards – as there should be……..never mind.  The question is still looming, did he survive?  I am pleased to say that the Electoral Registers for 1921 gave the answer, as both Haydn and Fred are included in the listings, along with their mother, Mary Ann who are all still living at Old Hall.