A walk around East Ardsley churchyard – who did we find?

On a warm and sunny September morning where else would I be than in a quiet and peaceful churchyard. My walk to the church was not my choice, more a favour for a friend, but the short time I spent there was pleasant.

I had recently been talking to a friend about the book he has had published – more on that at a later date, the last entry in his book to be precise.  I just happen to live in the village where the this person is buried with his parents and brother – photo’s taken and a quick nip into the church to take another photo and complete my task.  But, there always seems to be a but, a few more headstones that caught my attention – I was not sure if I already had them in my files, just to make sure I captured their images one more time, just to be on the safe side – one in particular caught grabbed my attention. 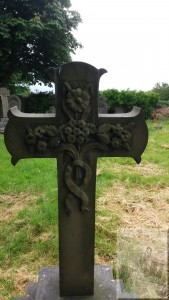 The headstone, now darkened with time, is a cross standing upon three tiers with a quite ornate embellishment adorning the centre of the cross.  The memorial is not beside any path where passers by may read the words on the top two tiers, it is in the centre of the burial ground behind the church.

Whose monument is it?

George William Young.  Who was this man? What was his occupation? Was he liked within the community?

There is a baptism entry in the St Mary, Whitechapel registers for a George William son of George William Henry and Harriet Young who lived in Pavilion Yard, Whitechapel Road.  George snr was a livery stable keeper. The year of birth from information obtained on the George’s headstone is around 1854/5, so the year of 1850 for his baptism is a slightly larger margin than I would have expected, although I am not surprised.

When George William, his parents and sibling were included in the 1861 census the family were still living at Pavilion Yard – George was 11 at this time and his age confirms his birth year as 1850. His father, George gave his occupation as Licenced Horse Dealer and Stable Keeper.

George married Frances Newton in the early autumn of 1875 in the Stepney area of London. The couple along with their family and friends gathered at St Dunstan and All Saints, Stepney and were married by Banns, which had been read on the 18th and 25th of July and the 1st of August. Frances was marrying in her own parish but George W gave his parish as that of West Ardsley. The wedding party gathering on the 2nd of August. The witness were George Young, George Nicolson (?) and ***** Nicholson (?).

By 1881, but more than likely after his marriage, George and his wife are found in the census living on Wakefield Road.  Although this census does not give a house number or name, it is known that George lived at Woodhouse Hall, on the junction of Wakefield Road and Woodhouse Lane. The enumerator who entered the information included that George was a Medical Practitioner, Thomas his younger brother was employed as his assistant. 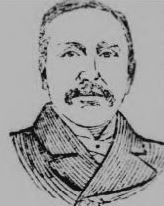 During the time George spent in the village he became President of East Ardsley United Cricket Club as the Yorkshire Post of 28th of May 1892 tells “Mr G W Young, East Ardsley. Mr George William Young, whose portrait we give, is the president of the East Ardsley United Cricket Club.  The ‘Doctor’, as he is more familiarly known, is a generous and enthusiastic supporter of all kinds of sport.  For several years he has figured at the head of the ‘United’. Three years ago, on the club winning the Wakefield and District Challenge Cup, for the second time, he presented each member of the team with a handsome silver medal.  Last year he gave five guineas and two bats as prizes to the members, and this year he has again offered a similar amount.  In addition he is always ready to contribute liberally to any special expense of the club.  He is a honorary member of the Yorkshire Country C.C., and a vice-president of several clubs in the locality.  He was elected unopposed as the first member of the Alverthorpe division of the West Riding County Council, a position which he still occupies.‘

When Aaron Bedford, farmer of West Ardsley wrote his will he asked George who gave his occupation as surgeon, and Robert Chadwick, grocer of West Ardsley to be his Executors.  It was in May of 1883 that Robert and George, as Executors placed a notice in the London Gazette calling for parties with a claim on Aaron’s estate to come forward by the end of May.  The estate of Aaron was worth approximately £270.

George snr. died on the 18th of July 1890.  The Probate entry for him tells that Pavilion Yard was still home to the family and he was now classed as a Gentleman, leaving a personal estate of £8,225 19s – quite a sum!

Life continued in  and around the village of East Ardsley for a few years until in January 28 1895 when the following article appeared in the Yorkshire Evening Post.

DEATH OF AN ARDSLEY DOCTOR – Sketch of Dr. Young’s career.  Much excitement has been caused in Ardsley and district by the announcement of the death of Mr. George William Young, surgeon.  An inquest will be held tonight at East Ardsley, before Major Taylor.
On Saturday night Dr Young retired to rest about 11 0’clock.  He woke about one a.m. on Sunday but dropped off to sleep again.  He continued to be very restless, and about four o’clock he got up, and, accompanied by Mrs. Young, proceeded to the surgery where he took a sedative with a view to making him sleep.  On getting back into his bedroom he suddenly rell, apparently in a fit, and expired immediately.
Dr Jackson, another medical practitioner in the neighbourhood, was sent for, but on his arrival life had been extinct for some time.  His services were, however required on behalf of Mrs. Young, who suffered terribly from the shock.
It appears that deceased – who was only 44 years of age – had been indisposed for a considerable period, and for a short time up to Wednesday last had been confined to the house, his assistants tending to his practice.  He resumed his duties on Wednesday, however, and attended to them until Saturday night.
The deceased was very widely known throughout the district of West Yorkshire, having taken a very prominent part in public affairs.  He was a native of London but came to Wakefield as assistant to Dr Thomas Walker, who has since retired, and is ow living at Leeds.  Subsequently Mr Young commenced practising at Ardsley, where he has since resided, and has held several positions as medical officer to large concerns in the neighbourhood.  He always took a keen interest in local affairs, and was for some time chairman of the East Ardsley School Board.  He has represented the Alverthorpe Division, which includes Ardsley, on the West Riding County Council ever since its formation.  Some years ago he represented West Ardsley on the old Wakefield Rural Sanitary Authority, of which body he was at one time chairman.  At the recent elections he was returned as one of the representatives of East Ardsley on the Wakefield Rural District Council.

The Leeds Mercury issue for the following day, 29th January 1895, is virtually the same as the entry in the Yorkshire Evening Post with the addition of ‘….. Major Taylor held an inquest last evening, – Mrs. Young said that her husband suffered from a weak heart, and that on a former occasion he was nearly gone.  On the present occasion she tried to administer brandy, but without success. – Dr J J Jackson said that from the appearance of the body, he should imagine that deceased had been suffering from a weak heart for some time. – The jury found a verdict of ‘Natural causes’. and in conveying it they expressed condolence with Mrs young in here bereavement’ 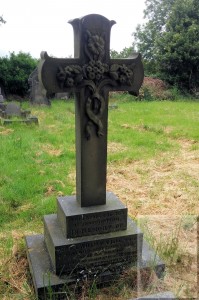 The headstone in St Michael’s churchyard tells in how much he was thought of within the area –  ‘This stone erected by subscription in memory of George William Young, surgeon, who died Jany 2th 1895, aged 44 years.  As a token of admiration for services rendered to the parishes  of  East and West Ardsley.’

When Probate was granted for George in 1896, his estate of £1226 1s was granted to his widow Frances.