Continuing my walk around Sugar Lane cemetery I came across a headstone now darkened by years of industrial grime but yet not badly worn and still very readable. The medium sized stone has a pointed arched top, inset with small carved flowers and the works ‘Thy will be done’. 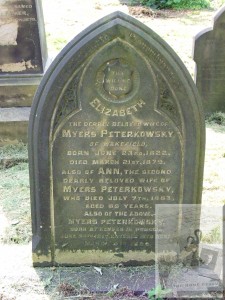 Myers Peterkowsky is found in the 1851 census living as a lodger in the home of Mary Brown. Home for the Brown family was Woods Yard, Providence Street, Wakefield. Myers, aged 34, told that he was a General Dealer and his place of birth was Poland – other sources have his place of birth as Prussia.

Ten years later in 1861, Myers is living in a house on New Street, Wakefield and still working as a general dealer. He is married to Elizabeth who is aged 40. Also in the house is Christiana Crawshaw aged 16, classed as daughter and servant, along with William Crawshaw aged 13 – the enumerator has very kindly written sideways, the words ‘step children’. So, along with two stepchildren, Meyers has three children to Elizabeth – Paulina Meyers aged 9, Louisa age 7, Caroline aged 5 and Joseph M aged 1. The ‘M’ included as a second name appears to be ‘Meyers’.

Going back to Christiana, there is a transcribed Christening entry for a Christiana Crawshaw baptised on the 31st of January 1847 in Ardsley by Barnsley whose parents were Thomas Crawshaw and Elizabeth, while an entry for Williams Christening in 1849 in – Royston could this be Christiana, William and Elizabeth in a former family? But, what was Elizabeth’s maiden name? There are quite a few family trees on Ancestry that include Elizabeth – only having her as a Crawshaw or blank surname. One of those trees has census and other documents linked to people that have died before the document event took place, Wonderful! With a little back and side tracking, there is a marriage for Thomas to either Elizabeth Ward or Elizabeth Watson in the March Quarter of 1843 in the Ecclesfield area, this area includes Barnsley, Ardsley, Monk Bretton and Royston, all areas relating to the Crawshaw family.

In 1865 Christiana married Patrick Sherry, a Serjeant in the 13th Regiment in the Parish Church (now Wakefield Cathedral). Thomas Crawshaw is included in the register but is not marked as deceased.

Myers and Elizabeth in 1871, are living on Queen Street, Wakefield and this entry gives more information about their places of birth. Myers informs the enumerator that he is from Kempen, Prussia, while Elizabeth says she is born in Hemsworth – her children all being born in Wakefield.

During the next ten years Elizabeth Crawshaw dies (possibly in early 1879) and by 1881, Meyers can be found still living in Queen Street, but with a new wife, Ann Bartrop, whom he married in Doncaster in the late summer of 1879. This census tells that Meyers was now a British Subject (as of January 1881). Also living in the house are Ann, his wife aged 62, his unmarried daughter, Sarah aged 19, Frances Ward, sister in law, aged 39 who acts as his housekeeper (it looks like Elizabeth was definitely a WARD!), along with Gertrude Stephenson a 7-year-old grandaughter.

While Myers is classed as a General Dealer, there are Trade Directories that have him listed under the heading of ‘Watchmaker, Jeweller and Silversmith’. An article in the Leeds Mercury of 22nd of August 1872 tells: ‘STEALING A RING BELONGING TO A WEST RIDING MAGISTRATE. At Pontefract Court-house, yesterday, before Mr. A. Jessop, John Thomas Roberts, painter, was charged with stealing a gold ring, the property of Mr. W. F. Tempest, Ackworth Grange. The prisoner had been employed as a painter upon the premises on the 10th of August, and shortly afterwards the ring was missed from a cupboard where it was kept. The ring was identified by Mr. Tempest, who said the stone was missing. The stone bore the crest and arms of the owner, and a gryphon’s head with the motto, ‘Loywf as thow fynde.’ (sic). The prisoner went to the shop of Mr. Watson, jeweller, Wakefield, and asked the value of the ring; and subsequently sold it to Mr. Meyers Peterkowsky, jeweller, Wakefield, for 10s, being its value as old metal. The stone had then been taken from the ring. – Prisoner pleaded guilty to taking the ring but said he intended to take it back. – Committed for trial at the West Riding sessions at Wakefield.’

A few years later, in 1883, Ann dies. By the following year, 1884, various family trees have Myers marrying a lady called Hannah or Anna Schofield – there is no FreeBMD entry for this union. There is, however, a transcription from Owston Church telling that Myers aged 66 married Hannah Schofield on 26th September 1883 – giving his father as Lionel Peterkowsky. Hannah is transcribed as being 55 years old and the daughter of George Kaye. With a little more patience a marriage is found for him and Hannah. FreeBMD also has him indexed as KOWSKY Myers Peter – don’t you love some transcribers?

In early 1888 Myer’s son, Joseph died aged 27, the following spring Myers also died aged 71. There is an entry in the Coroner’s Diary for recording Myers last few hours with a report from Hannah Peterkowsky of 5 Queen Street, widow……..further confirmation that Myers did marry again.

Hannah told the Coroner that she had known Myers for 10 years and been married to him for the last five years. She told that a Dr Wright had attended her husband for the last two years for occasional spasms of the chest. He had recently been to Leeds to and brought back a bottle of medicine. Hannah went on to say that last Friday he had been out all day last Friday. Hannah had gone to bed, leaving her husband reading the paper, who followed her shortly afterwards. About 1 am Myers gasped and Hannah went to fetch a drink for him. Later, placing his hands across his chest, he requested some ginger and water. After complaining of the cold, hot water bottles were placed at his feet. Hannah said that Myer had said he would get up to the commode. He became worse and a servant was called who brought warm earthenware places to apply to his chest. The servant just before 3 am was sent to get Dr Wright. The spasms became worse while trying to get to the commode so was helped back to his bed. He told his wife ‘I am poorly, Hannah’. With that neither speaking or moving he died very quickly at 4.20.

A further witness, John Todd, told the Coroner that he had known Myers for over 50 years and had attended many furniture sales with him and was a frequent visit to the Peterkowsky house. Todd had been at the house from about 8.30 the night before Meyers death and found him in good spirits with his wife, granddaughter and servant.

A notice in the Sheffield Independent for 11 March 1889: Death of a Well-Known Dealer in Vertu – On Saturday Mr Myers Peterkowsky, residing in Queen Street, Wakefield, and who has been in business in that town for 52 years as a furniture dealer and plate broker, died suddenly from heart disease, aged 72.  The deceased has left a remarkable stock of curios, worth, it is said, several thousands pounds, which may now come to the hammer‘.

Probate for Myers estate was granted on the 2nd of May 1890 – ‘The Will of Myers Peterkowsky late of Queen Street Wakefied in the County of York General Dealer who died 9 March 1889 at Queen Street was proved at Wakefield by John Thomas Hall of Wood Street Wakefield Bank Manager and Charles Henry Marshall of New Scarborough nr Wakefield Commercial Clerk the Executors‘.

Finally, going back a few decades there is an Alien Arrival on Ancestry on 30th of May 1837 for a Nobel Myer Pieterkowsky, a dealer, native of Prussia. The arrival paperwork tells that Myer has a passport from the Prussian Government, the sheet being duly signed by the Port Officer ***** Fabian and by Nobel Myers Pieterkowsky……….could this be Myers entering the country to have a long career in Wakefield.

This now brings to the fore another question, what made Myers make Wakefield his home?