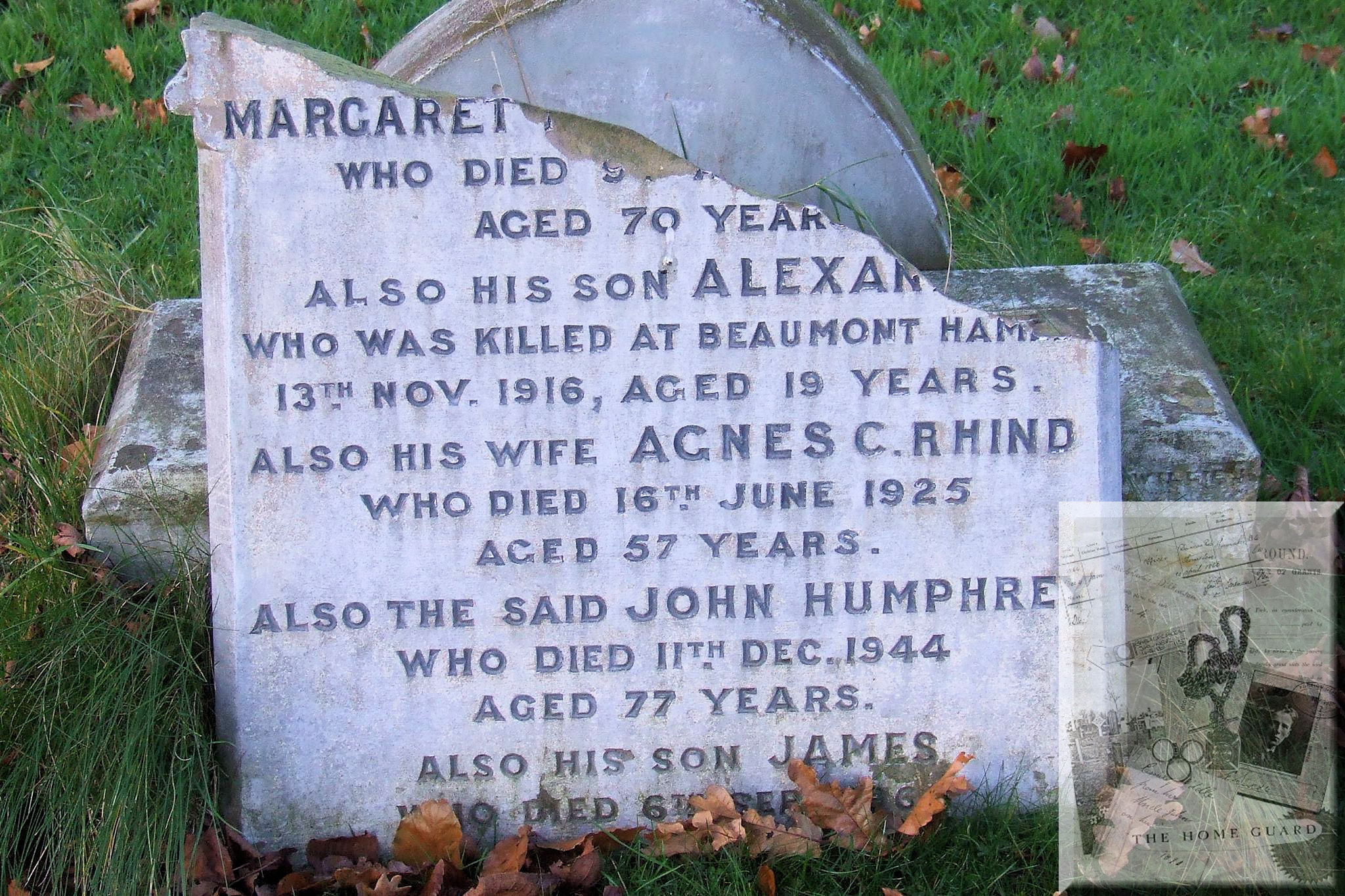 In Lhanbryde Cemetery there is a broken headstone remembering the Humphrey/Rhind family. The wording on the top section of the headstone was too heavy to move, (health and safety and all that) and see the information.

The name Margaret is missing the top of the ‘t’. The date of death is missing, though you can see she was 70 years old.  The information on the top section was too heavy to see the

Above Margaret, there must have been another name included (probably John Humphrey). The second name is that of Alexander, who was, Killed at Beaumont Hamel on the 13th of November 1916, aged 19. Below, Alexander is Agnes C Rhind, who died in June 1925, followed on by ‘the said’ John Humphrey who died in December 1944 aged 77 and finally, his son James.

The majority of my friends know that I am a sucker for an intriguing headstone or one that bears the name or remembers a soldier or someone who gave service. I seem to want to know who they were – putting meat on bones, as they say!

Alexander had been born in Forres on the 2nd of August 1897. In the 1901 census, 92 North Road, was home for John (a cycle mechanic), Agnes and their five children. Later in his teenage years, he worked as a joiner.

When I began looking for information I must admit I made a very basic and newby error!  I started looking for Alexander Rhind, which gave me a number of records.  Within minutes I was back on track looking for Alexander Humphreys.  As you can see from the headstone – wife and son, then John Humphreys.  This is not a mistake you would make on an English headstone, as in England a married woman is known by her married name.  When I initially started looking into my mother’s family some four decades ago, I could not work out why women had a different name, even though ‘wife of’ or ‘husband of’ was included.  Why were all these people not married?  Why were they so many base-born children?  Then one kind person told me a few words and I have never forgotten them ‘a woman keeps her name from cradle to grave’.  I must say it does make looking for a wife’s maiden name a great deal easier.  But I digress.

Alexander enlisted in Elgin on the 11th of May 1916, where he became Private 6198 in the 5th Battalion, Seaforth Highlanders. The 5th was part of the 51st Division and took part in the attack on Beaumont Hamel on the 13th of November 1916. The 51st, was situated to the North of Beaumont Hamel, split into four waves. During the first three days of battle, the 51st lost five 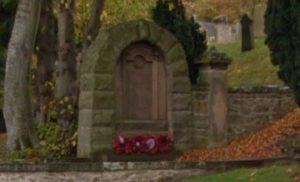 officers and 75 ORs (other ranks) many more joined their fallen comrades in the days to follow due to their wounds. Alexander was one of those 75. Sadly, he has no known grave and is name is recorded on the Thiepval Memorial with over 72,100 others whose final resting place is not known.  He is also remembered on the Lhangbryde War Memorial and in the Moray Roll of Honour.

A very interesting and informative description of what happened that day and the days that followed can be found here and here.  In the first link, there is information about another local lad, George Eric Edwards of Lossiemouth.