I don’t tend to research WW2 soldiers as there is not as much information available online…..yet!  But this little headstone in Cluny Hill Cemetery, Forres shouted out at me to have a look and see what I could find.   The two words that caught my attention were ‘Hong Kong’.  Well, I had to have a look, didn’t I 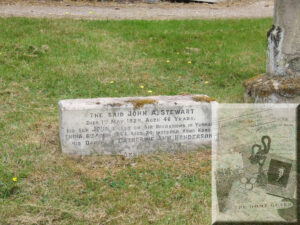 What did I know?  I knew the soldier’s name, well I presume he was a soldier – I may be proved wrong.  I knew when he died and where.  I also knew the names of his father, mother and sister – don’t you just love a good headstone?

Let me start my search with a visit to the CWGC (Commonwealth War Gaves Commission website.  The CWGC have recently updated their website and it is not as easy to search as it was.  Gone are the search boxes we knew, now the boxes are less with the option of adding extra search criteria.  You also have to contend with mouseover menu’s that drop down at the slightest move of a mouse – I am not a fan of mouseover menus.

Who am I talking about?  John A Stewart as the headstone commemorates him is on the CWGC John Alexander Stewart, and he is not a soldier!  John was Leading Aircraftman 972440, John Alexander Stewart who served in the RAFVR (Royal Air Force Volunteer Reserve).  He was 24 years old when he died on the 6th of April 1944  in Yunnan.  Yunnan borders Laos, Vietnam and Myanmar (Burma) so there was quite a bit going on in that region during WW2.

Both the family headstone and the CWGC site tell that John’s father was John Alexander and his mother was Annie Henderson.  Only the headstone mentions John’s sister Catherine Ann who died in 1954 aged 37.

The family headstone also tells that John died in air operations.  During the time around his death, the British Army,  the Chindits formed by Ord Wingate were fighting in northern Burma, an unconventional long-range war that was only kept going forward by supply airdrops from the RAF.  Could this have been John’s job to keep the army supplied?  It’s a possibility!

Quite a lot of information from so few sources but with John being from Scotland it makes online research difficult for births, baptisms and census – Scotlands People being a pay per view site.  I wish, oh, I wish they would change to an annual subscription.  As I can’t use that source for information, well I could, but not going to.  I normally Google a person’s name near the end of my research, it looks like I’m near the end so a Google search it is.

Initially, I used John’s name but that was too broad a search.  Next was to include his rank and that came up with a wonderful site.  I’ve used the site before and again it did not let me down.  The RAF Commands site is a cornucopia of information and never fails to fulfil.  A simple search for John came up with his plane and fellow crew members along with a description of the events that lead to his death.  I now am able to tell you that John was in 357 Sqdn and was on Liberator III BZ952 lead by F. Sgt Frederick Sullivan (1087865).  Along with John and Frederick three was eleven other crew on board that day who were delivering petrol into the stores at Kumming, China allowing RAF Special Duties to refuel there before continuing to Siam during the rainy season.  So I was partially correct in what John was doing at the time of his death.  The entry on RAF Command can be read here.

This wonderful website has a large collection of photographs relating to the 357 squadron could Alexander be immortalised in one of these images?