When researching a families history or researching a One-Name Study, there is always one or two people, maybe more, that calls out to you – some even shout…Find Me!

One such name that shouted out the other day sparked my curiosity not because of his name but of where he was when he died.

Who am I talking about? – His name is Alexander Riach Masson.

Masson although I’d come across the name on a couple of occasions with links to the RIACH family. It was his middle name that caught my attention.  Alexander’s middle name, Riach is his mother’s maiden name.  The Scottish Naming Tradition can be such a help when looking for the maiden name of a wife and mother.

So, what did Alexander do in life and who were his parents?

When looking at the 1881 census for Findhorn James gave his occupation as Seaman and Elizabeth gave hers as Seamans Wife. The time for the 1901 census came around, Elizabeth and Alexander were living at 4 Kirkwood Street, Govan, Lanarkshire with her sister. In 1911, Kinloss was home again to the family.

The Masson family from Findhorn seem to have a long connection with the sea. Many being holding either Master’s or Mate’s Certificates. James, Alexander’s father in later years, became a Master Mariner.

Elizabeth Riach was the daughter of James Riach (1804-1877) and Justina Nicholson. The united families – Riach’s and Masson’s were to be found around Bellie and Findhorn area.

The years past but the Great War was still a painful memory. Both James and Elizabeth had died.  Alexander had gone to sea, like his forebears and another war was on the horizon.

Somehow Alexander ended up in Calcutta, as he was on board the SS Calabria bound for Liverpool via Freetown and Belfast.

The Calabria, a Steam Passenger Ship, built by A B Wesser completed in 1922. Originally, launched as the Wesser she was sold in 1935 to an Italian company and renamed Calabria.

In 1940 Italy declared war on France and Great Britain. At this time the Calabria was in dry dock in Calcutta. On the 11th of June, the Calabria was seized by British Authorities with plans to rename her Empire Inventor. In December of the same year, she set sail for Liverpool loaded with 4,000 tons of iron; 3,050 tons of tea and 1,870 tons of oil cake. Her Master was David Lonie who commanded 128 officers and crew plus 230 supernumeraries, who were travelling to crew other vessels – these were mainly Indian but did include four Hong Kong crewmen and one Danish merchant officer. Her Chief Engineer was Alexander Riach Masson.

The Calabria left Freetown, the capital of Sierre Leone, with convoy SLS-56 but fell behind. Although behind the rest of the convoy she continued her journey through perilous waters.

On the evening of the 8th December 1940, some 295 miles west of Slyne Head, Galway, she was spotted by the German U-boat U-103 commanded by Viktor Schultze, a career sailor and highly decorated Commander. He was the recipient of the Knight’s Cross of the Iron Cross with Oak Leaves.

At 20:58, blacked out and under wartime regulations, she was torpedoed followed by a second six minutes later. The moon, between half and full moon, on a clear night, would have given off- enough light for U-130 to see her against the sky.

The Calabria sank with all hands. According to the crew and passenger list, the eldest on board was Santan Martins, aged 79. Some reports say he was the eldest merchant seaman to be killed at sea during the Second World War. The youngest on board the Calabria was 18 years old, Cadet Leslie Charles Norris.

Can you guess one thing that SS Calabria and U-boat U130 have in common?  They were both built by A G Wesser.

The family headstone in Kinloss tells that Alexander was not the only Masson son to die during this period in history:- 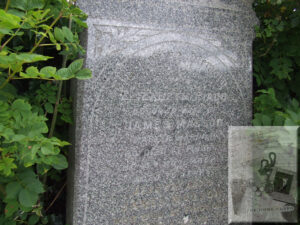 Alexander, of South View, Findhorn left over £2000 in his will. 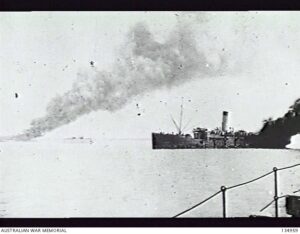 S.S. Zealander during the attack in 1940

Alexander’s brother James travelled to Australia in 1896 as an apprentice on an unassisted immigrant. Somehow during WW2 James ended up on SS Zealander.

On February the 19th 1942 the Japanese Airforce bombed Darwin. Quite a few bombs fell close to the Zealander – one eventually fell through a hatch and exploded, causing a serious fire. Later Japanese planes attacked with cannons and machine guns. The ammunition hold exploded, while the pumps were disabled by another bomb. The order to Abandon Ship was given.

The Zealander sank to the bottom of the harbour with only its masts visible above the water. Two members of the crew died from sounds but the remaining 142 survived.

Was James Masson one of the two seamen who died of wounds?  It sounds like he could have been.