The Naval Dockyard is world famous as the home of Nelson’s flagship – HMS Victory, but the dockyards are also home to the Mary Rose and HMS Warrior.  Well, everyone talks about HMS Victory, so I shall give it a miss except to say that I am glad that I went on board and can appreciate the  every day conditions the men and boys had to endure – well I can imagine.  The conditions during a battle must have been horrendous – noise, the organised and well practised Battle Stations and the accidents of one mis-timed move, all this in cramped quarters with many men not being able to stand upright.

The crew would have consisted of over 800 men and boys – 11 Officers, 48 NCO’s, 80 Petty Officers, over 500 seaman and 40 boys plus approx., 150 Marines of various ranks.  I always thought the Marines were the extra military side of a battle – the sharp shooters and able to go from land to sea and just as capable on either.  But I was told that they were what you would call a peace keeping service – keeping peace between the seaman and the officers as unruly men could cause a great loss of life during a voyage. 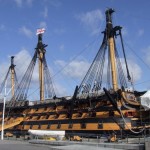 So, here she is – at the moment her top masts have been removed for work to be carried out on them and part of her has an outer shell of scaffolding and part of the 150ft Bowspirit has been removed.  To make it easier for the Oldest Commissioned War Ship to survive the masts and the bowspirit are now hollow wrought-iron masts,  from a ship called the ‘Shah’ in the 1880’s. These are lighter than the original wooden masts and require less maintenance.  The original main mast would have been taken from a tree with a 3ft diameter fir, spruce or pine, such woods are known to be strong but flexible.   You can only go onboard with a guided tour but it is worth the wait for a tour to begin and there is lots to do while you wait.

HMS Warrior – The largest, most heavily armed and heavily armoured warship.  No opponent dated to challenge her. She was 418 ft in overall length (compared to HMS Victory 227ft) and the 60 years since HMS Victory showed in the technology.  She had at her centre an armour plated box to protect her guns and machinery and this was impenetrable at even close range with the latest guns. She had the recent innovation of watertight compartments only made possible by her iron construction. 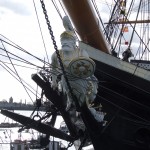 Not only was HMS Warrior feared for her guns but she was also fast, very fast – under sail she could reach 13.75 knots but she also had steam power made possible via her 10 boilers (each with 4 furnaces) and could reach 14.33 knots using these but using both steam and sail 17.5 knots could be made.  Her armament was also impressive. Warrior had the new breach-loading guns now firing shells – normal cannon balls bounced off ironclads.  Warrior unlike Victory had only one gun deck – she was longer but much more stable and able to carry heavier guns, with each gun having a crew of 18. 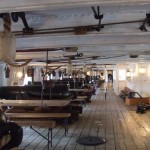 The crew of 705 men were made up of : 42 Officers and Midshipmen, 3 Warrant Officers an d 45 NCO’s, 401 seaman and boys + plus the engineering staff – 12 Chief Engineers and Engineers, 66 Stokers and Trimmers as well as 3 Rloyal Marine Officers and 24 NCO’s and Artilliary men.  Compared to Victory the decks were a lot more spacious and airyn and brighter. Also by now sailors weren’t ‘press ganged’ and volunteered.  After serving a set time they could achieve a pension

HMS Warrior was first of the Black Battle Fleet of the 1860’s and by 1875 Britain had built a further 22 armour-plated battleships.  The latter 22 had no sails but could steam 3 times further than Warrior without refuelling, but HMS Warrior never had to fire a shot in anger, surely that shows how successful she was – a real success story.

Along with the museum sections there is also a Harbour Tour a fantastic way to see H M Fleet and the harbour.  Sadly, Ark Royal, the one I wanted to see as my father had been a guest of honour on board her some years ago.  He received a cheque, the money raised by the crew to take a Normandy Veteran back to France and my father was chosen.  He had no idea he was going and didn’t normally go on the RNA trips but he did as he was told and turned up at the muster point all suited, booted and medalled.  The group were all on one of the decks ready to be photographed by a helicopter when his name was called out and the Captain presented him with a cheque – he was both emotional and honoured that his piers had chosen him.  Another honour came later that year when he again was one of three D-Day 1 vets to be invited to a Garden Party at Buckingham Palace.  Again he was overwhelmed when he mentioned the Garden Party to another member of the RE Association, who in turn told someone else, and dad ended up being chauffeur driven from home to the Palace – the two other vets had to catch a train, not fair I know but as it goes ‘it’s not what you know but who you know’.

So, needless to say I was disappointed at how much of the Ark I saw and sad that she rests in what is basically the Government version of ebay.

It is expensive to get in but entry allows you one visit to HMS Ark Royal, Harbour tour and Mary Rose Museum but unlimited access for 12 months to the other sections of the site – a good place to visit.