Wakefield & District Family History Society and Outwood CommunityVideo are combining forces to celebrate the Diamond Jubilee of Queen Elizabeth II – well what better excuse for various groups in the community to join together!

When ? – The 19th of June from 7pm – 9pm. Officially opened by David Dinmore, Deputy Lord Lieutenant of West Yorkshire.

What will they be doing ? – Exhibitions of Coronation and Royal memorabilia, films, slide shows of local Royal events ; flower displays with local schools displaying their artwork with a Royal theme.

Entry to the hall is FREE and you can get a cuppa and a slice of cake or a bun while you sit and have a chat and share some Royal memories.

It seems to have been a busy old week, with going to the KOYLI Museum on Tuesday looking for information on a WW1 soldier, work all day on Wednesday and Thursday, now that was very different but very enjoyable.

A friend of mine has been expanding his business (SeeYourPast) and I was asked if I would be a guide for a lady from Australia who wished to See Her Past.  The lady who I will call B communicated via emails to the SeeYourPast office where she was under the care of James.  At the early stages I was not involved, initially knowing only a name, Annie Eccles and an area – not a lot to go on, really! Without a little more information I could be barking up the wrong tree (sorry!!).But as emails  scurried through the air, we found out a bit more and an email giving a link to Prophet Wroe started the ball rolling.  As an name and an area was not a lot to base a days tour on. 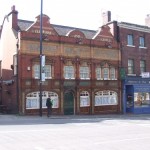 Now I had a bit more information I could look on the census and see where that would lead.  I started with the 1901 census as B had said that her husband family had been in Australia around 1905.  So, 1901 what did you have to tell us ? Well, Annie was there on the census and the connection to Prophet Wroe was loud and clear.  Annie was living in Melbourne House, the Temple based on the design of Melbourne Town Hall and the place where the Messiah could dwell, according to the Christian Isrealites.  There were only 2 people recorded as living in Melbourne House, the Head being Mary J Frazer, a widow aged 70, born in Ireland and classed as a General Servant (Domestic).  Annie was classed as a neice, single and aged 30, again born in ireland and again a General Servant (Domestic).

As I went back to 1891 I found that Mary Frazer had been there as the Head of the House, but there were still only 2 people in a quite large Melbourne House. But Annie in 1891 was described not as a niece but as a Servant.  It seems obvious that Mary was basically responsible for keeping the house clean, tidy and ready for visitors, while she and Annie were supposed to keep to the ‘back stairs’.

Back a further 10 years to 1881 and I was able to find the parents of Annie (B had not been able to find them).  The family consisted of Thomas, a gardener,  aged 45 from Co. Tyrone, his wife Elizabeth aged 49 from Armagh and their children, Thomas, a gardener,  aged 21 and Annie, a scholar, aged 13 both born in Armagh.  There is also a James Eccles, a shoemaker, aged 55 , born in Armagh – all living on Wilson Hill.

I now had the information to set out a days excursion for B and myself.  B new about the Underwood side so I concentrated on the Eccles who stayed behind in England and their extended lines.

Where did we go ?  I had arranged to meet B at Westgate Station and from there go for a coffee when I planned to give her an introduction to the places where we were to visit and who was connected to those places.  This did not really go to plan.  I’d spoken to someone in the The Green Room Cafe, in the Theatre Royal who told me it was open from 8am – brilliant, I thought a place to go for coffee and also include a bit of information about the Theatre.  No, what do they say about well laid plans………..as I walked passed from the car park………it was shut !!  I was not happy and although Wakefield Westgate Station did a very nice cup of coffee, the atmosphere was not the same.

While sat with out coffee I’d shown B some census extracts, Parish Register entries and a family tree I’d compiled for her.  Even after a few minutes we had found that we had so much in common.  I had been a little unsure while I sat with an A4 sheet of paper with her name in big, bold letters, but that all fell away when we started to chat over coffee.

After coffee we started back to the car park and walked  as short way up Westgate where I told her about the Elephant and Castle, The Orangery, The Westgate Run and the cattle market, woolstaplers and the large banks.

First stop was Wilson Hill.  As it happened we parked next to a rhubarb field and it seemed an opportunity to mention The Rhubarb Triangle, B was delighted by the view and the connection to rhubarb as her husbands family had always been rhubarb fans but she had never seen it grown commercially before.  Further up the hill and to the left is Melbourne House, as we know the home of Prophet Wroe, later an old folks home and now a part of a telecommunications company.  We stopped outside and took piccies, walked down to the farm buildings, the granary and other out buildings now private housing and saw 3 of the 4 gatehouses.  Just across the road we paid a flying visit to Carr Gate and the Lawns, then up the road to East Ardsley – Grand View actually.  Although Grand View is no longer there you can see the properties next door and across the road.  B walked up the road and was in awe of Old Hall which dates back to around 1622. The hall is now divided into 3 dwellings.  There were 2 fantastic and very large fire places in the end rooms with a staircase going from one side to the other – linking the two end rooms.  There was also a bedroom, panelled in oak(?) and again a large carved fire place.  I went in years ago and remember the floors upstairs sloped, making walking across the room a strange experience.

While in East Ardsley I took B to see one of the Forcing Sheds and explained the ‘forcing’ process. 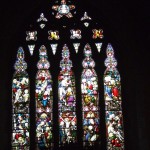 Our next stop was St Mary Magdalenes Church, Outwood where Thomas jnr (Annie’s brother) married Ada Hemingway.  The church was open on Thursday as it was Ascension Day and we were able to walk around at out leisure.  I was on the look out for war memorials and found 2 – the memorial to both wars with names only and a private memorial to the right of the door.  Lunch, where to go ?  I suggested The Rhubarb Triangle, keeping up the theme, so we headed there.  While waiting for lunch B and I chatted about our families and then it was time to head off again, this time to Carlton, Rothwell where some of her family lived and more rhubarb fields.  It was here that I confessed to B that I had lied to her during the morning and had a surprise for her but she would have to wait a little. 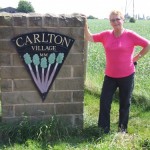 Time was pressing and we headed back through East Ardsley, over the motorway and headed for Wakefield on the ‘old road’ but I turned off towards Brandy Carr and turned into the drive of Melbourne House as I had arranged for B to go inside and see where Annie lived and worked. Even though Melbourne House is a working building and is used every day as a venue for meetings, the building is wonderful.  I had seen pictures of the mahogany and ebony  staircase and clock and read about the building in a book by Kate Taylor and John Goodchild, but the black and white picture did not do the entrance hall and staircase any favours.  I thought the stairs would lead up from the front entrance but I was shocked to see them go at 90º.  If we had been able to use the side entrance, now that would have given me the staircase view I had imagined… never mind! The lady who is responsible for the building came to meet us and we told her of Annie and how she was entered in the census of 1891 and 1901 and of Mrs Mary Frazer.  We were taken from room to room, up the stairs and passed the clock that is an integral part of the stairs and into more rooms.  Back down the stairs we then ventured into the cellar, this would have been very familiar to Mary and Annie.  There was a corridor with two rooms remaining, both with vaulted ceilings and mullioned windows, now minus glass, looking onto the hall.  One of the rooms still had a large stone slab, which would at one time have kept all the fresh food cool.  Back upstairs we went into the visitors room and had a coffee –  a wonderful room to the left of the front entrance.  Time was now getting on so we said our thanks and goodbyes and after a few photo’s outside the hall we set off to Wakefield and park the car again as B had said she would like to walk up Westgate and see the buildings I’d told her about earlier in the day. 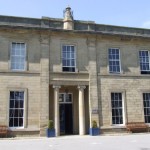 It was now nearly time to say goodbye.  But I had to make a phone call to James of SeeYourPast as B wanted to thank him for all the help and pointers he had given her over the past few months.  Her train was by now pulling into the station, so I said goodbye and wished her a fantastic trip across Europe and said that I would post her all the hard copies of the information.

All in all – Hot and sunny day + good company = very good day.

I did leave B with one question to solve – Absalom and Annie crossed to Australia in 1905 and crossing with them was a child aged 1 years called Rachael .  B had believed her to be the daughter of Absalom and his first wife, but Absalom and Annie had married in the September ¼ of 1904 and arrived in Australia in on 10th April 1905 after a 90 day voyage.  So, just who did Rachael belong to?

A very big thank you to the staff of Melbourne House – THANK YOU !

For those of you who may link to Annie Eccles and her husband Absalom Underwood here are a few local names that connect :-  Bedford ; Cobb ; Hemingway ; Wood and Frost.