A few weeks ago a set of medals was posted on a Facebook groups page.  The ribbons looked a little unloved, as though they had seen better days and a little on the sad side.  I contacted the person who had posted the photographs, asking would they mind if I blogged about the medals.  The reply came back…………….Yes, I could.   There has been a week or two gap since the positive message, but here goes!

As search of Soldiers who Died in the Great War with that service number came up with nothing.  The same with the Medal Cards and a few other sources.  A different route was needed. 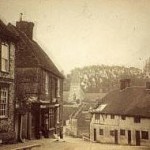 Trying again, with renewed vigor, I looked at the Medal Cards, as I knew there was one as we had pictures of the medals to prove it.  This time I entered EPPS and Royal Engineers, and there he was – EPPS, William, Pnr., 116158 and his list of medals.  What I now knew was that he also served as Pte., 292069, in the Labour Corps., and had entered France on 28th August 1915.  But, what is more important is that we know he is called William.

Why is it that you can find Service Records for every one else, but not the ones who you are related to…………….it is some kind of law but whose, Sods or Murphy’s?  More information about William from his Service Records –  William was living at The Square, Wickham, Hampshire.  Leaving his military records for a while and back to Civil Records. 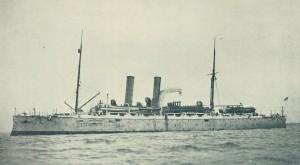 In 1911, William was 38 years old and had been married to Eliza Jane for five years and they had two children, George Thomas, 2 and Dorothy Alice aged eight months.  William had bee born in Portsmouth and earned his wage as a bricklayers labourer.  Ten years earlier in 1901 there is an entry for William Epps as a Royal Marine, as a crew member on the ‘Vulcan’ in the Grand Harbour Malta.  His place of birth varies slightly, so not completely sure this is our man.

Back to his service records – His Short Service Attestation is a Duplicate and the service number 116158 has been struck through and over written with 292069.  His Regiments also have multiple entries, starting on the line with Royal Engineers, written above is Labour Corps and then atop them all Pioneer Corps.  His address, we know as The Square.  He is a British Subject aged 43 and is married – this we know from the 1911 census.  He has also given previous service – this could have been him in the 1901 as there are the initials RMLI – cold this this be Royal Marine Light Infantry as seen in the census? He is also willing to serve for the duration of the war and he signed these papers at Whitehall London on 19th August 1915.

The next page. brings William more alive, as he is 5′ 8″ tall, with a fully expanded chest of 36″ and a 2″ range of expansion.  His wife Eliza Jane also added information to his records – that they were married on 14 of July 1906 at the Register Office, Portsmouth.  Her maiden name is not all that clear, therefore, a quick look at FreeBMD tells her maiden name was Hatton and she was a spinster at the time of their marriage.  Eliza also gave information on their children:  George Thomas was born on 2nd January 1909 and Dorothy Alice followed on the 9th of July 1910, with both children being born in Fareham.

William embarked for France, as a Private on 28th August 1915 as part of the British Expeditionary Force.  He was transferred to the Labour Corps on 31st of July 1917. 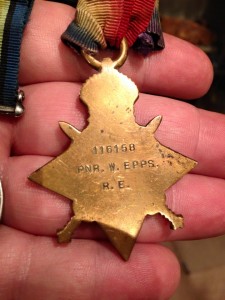 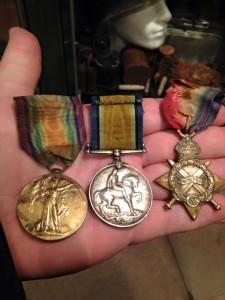 Also among his service records is the Discharge Documents.  It is so nice to write about a soldier that does not have a grave in a foreign land, a man who came home to his family, friends and neighbours.  After enlisting on 15th August 1915, William was Demobilised on the 15th of March 1919 in Nottingham.  In among the service records is a small slip of paper, the slip of paper is signed y William as a receipt for his British and Victory Medals.  There is also a receipt for another medal, as he only had three, this must be for the 1915 Star. which he duly signed for on 28th (?) October 1920 and he gives his details as 202069, 5th Labor Batt. R.E.

William, in February 1919, was issued a sheet of paper – his ‘Protection Certificate and Certificate of Identity (Soldier not remaining with the Colours’ which he would have had to carry with him.  it gives his regimental details, year of birth and where he would rejoin in case of an emergency, plus his occupation and address, and that was issued at Shorncliffe on 16th February 1919.

Further into the collection of his records is his original Attestation Paper.

There is a death entry for a William Epps aged 51 in the summer of 1925, which fits in with his birth being around 1874.

Jay Hewitt for allowing me to use the photographs