The Chantry Chapel of St. Mary the Virgin is a beautiful place – one of Wakefield’s few ‘little treasures’ left ! 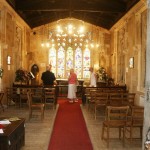 How many local people pass by on their way in or out of the city and never pay it a second thought.  But you would be surprised what a little oasis it is, just a few yards away from the busy A61.

You can’t say that you didn’t know it was there, as some might who do not know or care what Wakefield has to offer.  But the Chapel on the Bridge has been around a while and seen such a great deal as it stands with its feet in the river Calder and its face on the bridge awaiting and welcoming its visitors.

What has the chantry seen in its lifetime – this could be a long list!  It has seen Richard, Duke of York and the Battle of Wakefield in the mid 1400’s where Richard was killed. It has seen the Reformation when it was closed and then used as a warehouse, library, office and cheese shop, probably only surviving to today because it is an integral part of the bridge on which it sits so neatly.  It has seen it once again become a place of worship, and at one time being the parish church for the area until St Mary’s church was built.

The Chantry Chapel has outlived many of the younger counterparts including St Mary’s.  It has seen Kings and Queens come and go, the Napoleonic Wars, the Crimean War and countless other conflicts but still she continues to flourish, now having a full calendar of events and support.

Please pay our ‘little treasure’ a visit as she loves the company!