Bleue Maison Commonwealth War Grave Commission cemetery is situated within the community of Eperlecque,  Pas de Calais.  The cemetery, made in spring 1918 to be a final resting place for the dead from a group of Casualty Clearing Stations in and around Watten. Situated a short distance from the main St. Omer/Dunkerque road is where 60 casualties of WW1 and one unidentified casualty of WW2 now lie surrounded by fields of corn.

Bleue Maison is a small place compared to other cemeteries in France and Belgium, but sometimes these are more personal. While the vast numbers of white stones in the larger cemeteries show how horrific war could be, this small cemetery, close to a small road and surrounded by fields can, like other small places can be left out, while the bigger, more well known get all the glory.  But not this time!

Let’s take a little walk around and see who is there! 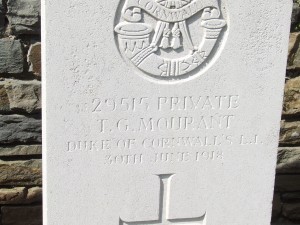 Thomas George Mourant – Thomas was the son of Thomas Mourant and his wife Eliza.  In the census of 1911 the couple had been married 15 years and Eliza had given birth to three children, two of which had survived to be named in the census – Thomas aged 14 and his younger sister, Violet who was only three. Thomas snr, a house carpenter, was born in St. Clements, Jersey, while his wife was born on mainland UK in London.  Thomas jnr, was born in Grourville(?), while his sister was born in St Martins.  In this census the family of four were living at Percy House, Gorey, Jersey.

During the Great War, Thomas served in the Duke of Cornwall’s Light Infantry, as Private 29515. He enlisted in Grouville, the place of his birth and had previously served as no. 172 in the Royal Jersey Garrison Bn.  Thomas, like all other Jersey men, volunteered to go to war, as Jersey and the other Channel Islands did not call-up their young men.

Thomas George Mourant died of wounds on the 30th of June 1918.  He had been one f over 6,200 Jersey men who served in HM Forces and one of 862 who were either killed in action or died of wounds. His entry in the Army Register of Soldiers’ Effects, tells that monies due to him were paid to his father and  had all been finalised by the end of 1919. 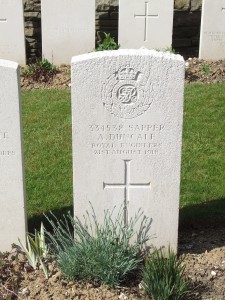 Arthur Duncalf – Arthur, born in 1898, was the son of Arthur and Charlotte Duncalf, who in 1911 lived at 3 White Street, Widnes.  Arthur snr, worked  a local soap works.

Arthur enlisted in Lower Bebington, joining the Royal Engineers and becoming Sapper WR/334538 and served in the Inland Water Transport battalion.  Arthur died on the 21st of August 1918 aged 21.  The extract below gives us a little more information about Arthur – especially the fact that he drowned whilst on active service only a few months after joining the RE’s. The information also tells that he was previously buried in the small churchyard in Watten before being moved to Bleue Maison.  It seems that he was liked by many, and that can’t be a bad thing, can it? 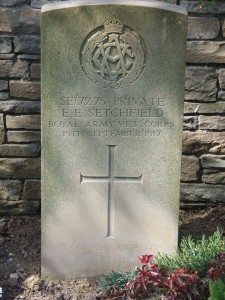 Edward Ernest Setchfield – His entry in Soldiers Died in the Great War, tells that Edward was born in Emneth, Norfolk, and that he enlisted in Norwich.  The Army Veterinary Corp., had Edward listed as Private SE/7275 and he died on the 19th of September 1917 age 37.

Edward had married Rose Adamson in late 1901.  By the time of the 1911 census Ernest and Rose were living in Wolsoken, with their two children at 40 Elizabeth Terrace.  Ernest worked as a coal porter to support his family.

Looking a little further into the surviving records, the Register of Soldiers’ Effects sees all Edwards effects finalised by 1919.  But one thing that is noted, is how he met his death.  Edward Ernest Setchfield is noted as being accidentally drowned in France or Belgium.  Edward rests in a sheltered, shady corner in what is quite an open cemetery.