Rugby and the first world war

During the Great War young men who had a connection or a common interest, joined the fight. As seen in the previous post the men from the Caledonian Hotel joined up  As did men who were from an area – the Leeds Pals and the Barnsley Pals and the Accrington Pals for example. Other groups and associations also formed battalions – men who were barristers, public schools and sportsmen to name a few. 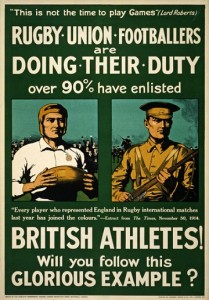 One such group is the subject of a podcast – Rugby players.  The rugby players were among the first men to volunteer and leading from the front, they paid a high prices.  The National Archives, podcast tells the story behind award winning author, Stephen Cooper’s new book After the Final Whistle: The First Rugby World Cup and The First World War.

The podcast is a very informative listen and if you are a rugby fan, you might hint that this book would make a nice ‘stocking filla’! 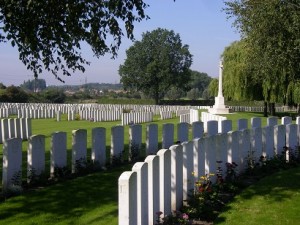 Wikipedia has a list of rugby union footballers who were killed in both world wars – some 27 men gave their lives.  One such man was Francis Nathaniel Tarr who served a Lieutenant in the 1st 4th Leicestershire Regiment.  He died on the 18th of July 1915 aged 27.  Francis or Frank as he was known rests in the Railway Dugouts Burial Ground (Transport Farm), some 2kms west of Killebeke, Belgium. 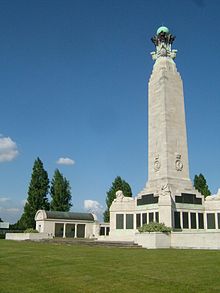 Another rugby man was James Henry Digby Watson, known as ‘Bungy Watson’.  Born in 1890 he qualified as a doctor  and was killed while serving as a surgeon aboard HMS Hawke when it was torpedoed and sunk in October of 1915.  ‘Bungy’, like many other who served at sea is commemorated on the Chatham Naval Memorial.