A war memorial, taken from its hanging place, placed in a cupboard for safe keeping, then forgotten for decades. 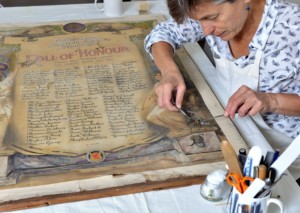 The framed memorial was found on the fourth floor of the Caledonian Hotel, hidden away with other memorabilia and now found by members of the modern day staff.

Helen Creasy, a paper conservator has been given the mammoth task of repairing the memorial that is believed to contain the names of the hotel staff who went to fight in the Great War of 1914-1918.

The restoration has been made possible by a grant from the Scottish Government backed War Memorials Trust. Other memorials throughout Scotland have also been recipients of grants.