It is amazing how many interesting headstones you can find in your local cemetery or churchyard.

An ever growing population soon brought the churchyard burial grounds to bursting point, making a need for a Municipal cemetery. Sugar Lane cemetery, Wakefield opened in 1859 covers over 9 acres on land once owned by Sir J Pilkington.  The cemetery is divided into Conformist, Non-Conformist and Catholic sections.  The division of religion at the time was shown by the central twin chapels, as many used to say ‘one for us and one for them’.  The funny thing is that both the Church of England and the various Methodist religions used to say the same thing, making the saying work for them.

Over the past 12 months I have been researching over 250 men and women who either rest in or are remembered on headstones in, as it is known locally, Sugar Lane.  Whilst walking every row and reading every headstone I found who would form the basis of the research but also found many other interesting headstones that sadly fall outside the criteria I had set. 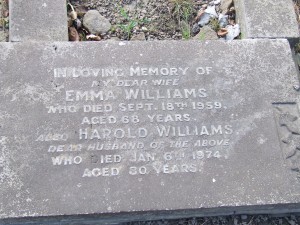 One such headstone has kerbstones, with a small header tone flanked by two square stones, each with a receptacle for flowers.  The kerbs are now uneven and there is a stone slab within the kerb stones but only a small portion can now be seen.  At the foot of the memorial is a tribute which reads – 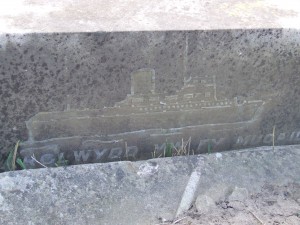 Nothing remarkable, you might say but the headstone has engraved on it a vessel and the words ‘Arglwydd yw fy Mugail’ (The Lord is my Shepherd).

Possible clues:  Was Mr Williams Welsh or were his family Welsh?  The name Williams and the Welsh inscription below the ship would appear to indicate that.

The Ship: Did Harold serve at sea in WW1, as he was old enough?  Was he in the Royal Navy or in the Merchant Services?

Intriguing, but perhaps the mystery is buried for ever or does someone out there reading this now the answers to these questions.