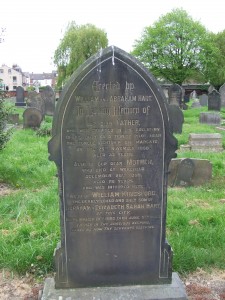 Another headstone is highlighted from Sugar Lane cemetery, Wakefield.

A simple, yet quite beautiful in its way, and remarkably very well-preserved, is the headstone erected by William and Abraham Hart paying tribute to:

‘our dear father who was drown in the execution of his duty as a Trinity Pilot, near the Tongue Lightship, off Margate, on the 25th of November 1858 aged 33 years,’

Further down the stone –

‘Also of our Dear Mother who died at Wakefield December 26th 1899, aged 78 and was interred here.’

We know who erected the headstone, but why did they not put their parents’ names for all to see?  They were proud of their father but more than likely saddened at the way he lost his life – but who was their father?

Where to start?  An internet live chat with a librarian from Deal came up with nothing on  the drowning, so no clue to his name there.  A quick look at Freebmd for deaths in the deal area around the date revealed  nothing that you could say ‘that’s him’ to.  So I decided to go forwards and eventually go back……………..Bingo!

I looked for Abraham on the 1871 census first, since the name is less popular than William but found no Abraham.  However, the 1861 census showed Abraham aged nine born in Deal (I now had his approximate birth year) living with his mother, Sarah.  This was confirmed by the fact that she gave her occupation as ‘pilot’s widow’.  She was aged 39 and born in Ash (?) Kent.  The family was living at Water Shale in Deal as were quite a few other pilots and their families.  But why was William not with his mother and sibling?

Further researching on the 1861 census showed William to be a pupil at Greenwich Hospital School.  The Royal Hospital at Greenwich was Britain’s largest school of navigation and seamanship.  During the time William attended the school, it was housed in what is now the National Maritime Museum.  I needed to find his birth and in the 1851 census I found William aged one, living with his mother at 20 Water Street, Deal.  The head of the household was Abraham Hart aged 27, who gave his occupation as that of mariner and his place of birth Deal – the anonymous parents of William and Abraham had now come to life.

By 1871 Abraham was living with his mother in St Mary’s Square, Lambeth, where Abraham was a Surveyors Pupil and as for William there were quite a few saying they were born in Kent but nothing to point a finger at and say ‘found you!’.  The family so far were in the South of England. When and why did they come to Wakefield?  The 1881 census answers that question  as by then Abraham, living in Northgate, was an architect and surveyor, married to Elizabeth.  They had three girls and grandma  was living with them.   William in 1881 was married but on the night of the census he was with 11 other pilots on the Granville out of London.

Sarah was not on the 1891 census as I knew she had died  in 1899, Abraham, however, was living at 99 Northgate and by 1901 he was residing at Oxford House, Oxford Road, Wakefield. His brother, William, following in their father’s footsteps, was a Trinity House Pilot in the Cinque Ports living with his wife, Caroline and two children in Malcolme Regis.

Ten years later Abraham was living at 24 Leeds Road and had been married to Elizabeth for 36 years.  The couple had six children but sadly lost one.  William was living in Dover with a group of other Trinity House Pilots, while Caroline, who said they had been married 23 years and had had three children, lived in a nine-roomed house named Sh**ad House, Deal.

Back to the headstone, after ‘our dear mother’ is the epitaph to –

William Kingsford’, the dearly loved and only son of Abraham and Elizabeth Sarah Hart of this city. Born March 12th 1885, died June 5th 1908. ‘Father in thy Gracious Keeping, Leave we now thy Servants Sleeping.