The Somme Remembered – during the month of July 100 years ago many servicemen, nurses and aid-workers lost their lives. 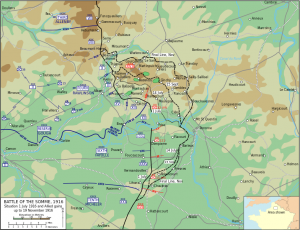 The Somme 1916 via Wikipedia

The First Day of the Battle of The Somme saw Commonwealth countries and the allies suffer over 650,000 being killed or wounded, while Germany had approximately 450,000 killed or wounded.  Such huge numbers for one day – imagine taking the populations of Liverpool and Edinburgh off the face of the earth!

What can Wakefield Family History Sharing do to mark this month?

The month of July will feature 31 casualties – servicemen, nurses, aid-workers who lost their lives in that month during World War 1.

Let Wakefield Family History Sharing know and their life and times could be featured in our The Somme Remembered month.

Use the contact form initially to show your interest or email    Somme (at) Wakefieldfhs.org.uk

The First Day of the Somme Imperial War Museums podcast