As I have said earlier, war does not care what your background was or whether you were a Private or a high ranking officer.  They were there and that was all that was needed.

The man, I say man and not young man, as the one who died 100 years ago today was in his early middle years.

So, who was this man?  A man who was in the prime of his life.

Humphrey Francis William Bircham, born in 1875 to Francis Thomas Bircham and his wife Edith nee Okeden, who married on the 11th of May 1871 at Turnworth, Dorset.  The couple went on to have four children.  One of the children is the focus of days remembrance, while another son will get a small mention.  In the meantime, a little about Francis Thomas – in 1911 Francis, his wife and daughter Cecily were living at Gwentland, Chepstow with 7 servants in an 18 roomed house.  Francis was a Retired Lt. Colonel, JP and Local Government Board Inspector.

In 1881 the family of five – Francis, Edith, an elder sister Catherine Margaret and the two boys were looked after by six servants. Our man is the eldest of these two boys and like his brother was educated at Eton College, Humphrey went on to attend Sandhurst.  While he was at Eton College he was a keen cricketer, as were a few men in his immediate family. He also played for county and military teams during his life.

Going back to where he was at the time of the 1911 census – he eludes me during the 1891 and 1901 census.  By 1911 he was aged 36, a married man and gave his his occupation as that of Captain in the Regular Army. Home was 4a Low Belgrave Street.  When Humphrey signed the census he added ’60th Rifles’ after his signature, anyway, 4a was an eight roomed house which

the couple shared with two servants. Humphrey had married Gladys Violet Willes in 1908.  By the way her father was also a cricketer. The London Electoral Register for 1912 includes Humphrey at 4a Lower Belgrave Street.

Humphrey joined the army in 1896 and served in South Africa. During his war service, Humphrey was awarded the D.S.O. (Distinguished Service Order), which he was awarded as part of the 1915 Birthday Honours by King George V.

By the title of this series of blogs and what was mentioned earlier you know that 100 years ago Gladys became a widow when Humphrey died of wounds nr Pozier after being hit by a shell earlier in the day.  Humphrey died being with his men, a dangerous but much respected activity.  And so he died during an attack on German trenches near High Wood – the attack failed due to a fierce German counter attack.

Humphrey Francis William Bircham, Lt. Colonel, serving with the King’s Royal Rifle Corps rests in Corbie Communal Cemetery Plot 1, Row R, Grave 34.  His headstone includes the following inscription ‘He died with his men, He lives with those he left behind.’

The medal card belong to Humphrey is full of information, including when he entered France. Along with a note saying that Humphrey’s father applied for his medals on behalf of Gladys, his wife. At the bottom of the reverse of the card is the address for Gladys and an address for her father-in-law – 42 St George’s 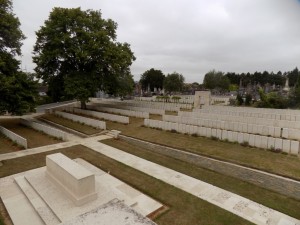 The Register of Soldiers’ Effects notes that money owed to Humphrey was to be forwarded to Cox and Co., whom I believe were solicitors used by many military personnel. The Probate entry for Humphrey has £123 15s 8d going to Gladys Violet Bircham, this would include moneys from the War Office as accounted for in the Soldiers’ Effects Register,

Back to his brother who I mentioned earlier – Bertram Okeden Bircham who was born in 1877. As I have said he also attended Eton College, he also was a keen cricketer.  Bertram was called to the Bar in 1901, Inner Temple.  During WW1 he served as a Captain with the Hampshire Regiment and awarded the M.C. (Military Cross).  After the war he became Solicitor to the Ministry of Labour and was Knighted in 1932. He died in 1961 when he left ove £4000 to his sister Cecily and Arthur James Locke, solicitor.