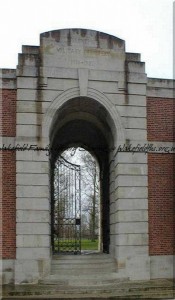 Arthur was the son of Frederick and Mary Nimz who when giving information to the newly formed Commonwealth War Graves Commission told they were living at 123 Harslesden Road, Wilsden Green, London.  Arthur was awarded the British and Victory Medals.

Arthur had bee born in 1896, being at the time one of four children.  Frederick his father had been born in Germany but was now a British Subject, who was ‘living on own means’. Home for the family was Selina House, Southal Beach(?). 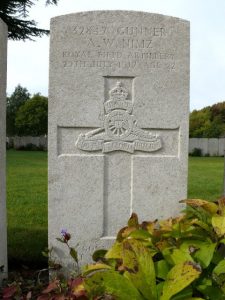 Ten years later in 1911, Mary and five children were living in a flat with three rooms in Albert House, Harlesden Road, Willesden Green, NW.  Mary was a widow working as a tailoress in a gentleman’s tailoring business.  Fifteen year old Arthur was working as an assistant book seller.

Frederick William Nimz had died in the late summer of 1908.  Probate for Frederick William Charles of Albert House, was proven in 1912 – monies totalling £1587 10s were left to Mary, his widow.  Mary Harriet Nimz of 123 Harlesden Road, died on 14th of June 1926 with her monies totalling £2128 16s 14d being left to Alfred Frederick Nimz, tailor and Edward William Charles Nimz, metal worker.

During the Great War Arthur’s brother Frederick William also served.  He served in the Middlesex Regiment as a Private.  His serial numbers being 4706 and 291756.