Looking for his Medals

In June I’m doing a small exhibition to mark the 75th Anniversary of D-Day.  With this in mind 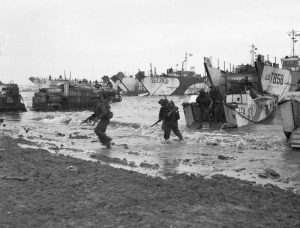 and being ridiculously organised, I made a list of my father’s belongings and collection I had inherited that could be included and I thought would interesting to the observer.

Two items came immediately to mind, quickly followed by his collection of newspapers, reunion photographs, maps etc.,   The first item was his diary for 1944 and included the lead up to the 6th of June 1944.  The second item was his medals.  He was very proud to wear his medals but he had one little niggle – he had been on board a ship, waiting to be given the ok to go ashore.  I’m not sure where he was waiting to land but he was a bit niggled that he was on the ship for 3 days short to be eligible for the Atlantic Star.  Along with his medals were also a collection of ‘badges’ given by the French Government to D-Day Veterans. The Medals, they were in a box and I knew exactly where they were.

Starting in my ‘office’ I took books off their shelves with a Normandy connection.  Then on to the Medals.  But here I hit a brick wall and went into a slight panic.  In the box, I thought housed the precious medals was nothing but a collection of regimental ties – Normandy Veteran Association, Normandy Campaign Association, Royal  British Legion, Royal Engineers, Royal Artillery and more but no Medals. On the plus side, I did find items that had slipped my memory along with a large number of newspapers and various letters from Her Majesty Queen Elizabeth II and members of her family. It was a pleasure to see even though it was tinged with sadness.

Where were those medals?

After leaving the search for a few days I decided on a systematic search from my ‘office’ downwards.  On a row of shelves, at the side of one of my printers, are a number of large shoe boxes containing family history bits and bobs, local history leaflets (they will have to go to be recycled) and CDs.  Starting with the nearest box I found what I had misplaced.  They were in a box but not the box I remembered them being in. Isn’t it funny how your mind plays tricks with you?  I did, however, also find a large number of lapel badges for the NVA, NCA, RBL plus regimental badges and buttons – panic over!

With over two months to go all the display material is boxed, well that is apart from a very large frame map of the D-Day beaches, all that I need to do is print a few information labels, then we are ready to go.

Excerpt from my father’s diary for March 24th 1944 ‘ 2nd night out this week, went to pictures, and enjoyed it and had fish and chips and enjoyed that too.  Another week nearer to leave.‘

My father was a dispatch rider and expected to be landing on French soil D-Day +5.  He actually set foot on the beaches of Normandy D-Day + 1 hour.  That is another story and leads onto another story connected to HMS Ark Royal.