I sit down with all good intentions to write another section of my blog. Yes, good intentions, but it takes me longer to decide who to write about than it does to put the information into words. I have so many photographs of military-connected and interesting headstones choosing who should be next is extremely hard.

Once again it is a Scottish cemetery that is providing the headstone – Linkwood Cemetery, Elgin, Morayshire. Technically, the subjects memorial is not a headstone but a plaque. To be precise one of a set of four plaques for the MacPherson family.

It was one of these simple plaques that caught my eye and yes, you have probably guessed correctly that it has a military connection.

JCM was born on the 30th of January 1886. The son of Robert MacPherson and Catherine Duff. Robert was the Minister of Elgin.

JCM and his family were living at the Manse, Elgin in 1891. In 1901, he was living in The Manse, Monymusk with his aunt and uncle, William and Elizabeth MacPherson.

After attending local schools JCM attended Aberdeen University studying law. While at university he was a private in ‘U’ Company, Gordon Highlanders.

At the outbreak of war in 1914 JCM was working in the Solicitor’s Department of the North British Railway Company. According to some sources his health had not been the best he did still enlist in September 1914 to the 9th Battalion of the Royal Scots. Initially serving as Private 2383 he was soon to gain his commission and become a 2nd Lieutenant. In February 1915 he entered France. His medal card includes an address for his father on the reverse side – The Rev’d R MacPherson D.D., The Manse, Helensburgh. Very few medal cards include any information on the reverse.

Now commissioned to the 11th Battalion Royal Scots and attached to the3rd Battalion Gordon Highlanders. l He underwent further training and was now attached to the 1st Battalion. It was while serving with them that he was killed in action while leading the remnant of his Company for the third time to manoeuvre their way through a wire entanglement during the fighting at Loos, on September 25th 1915.

Aberdeen University – Roll of Service tell ‘His personality was one of unusual charm, and his kindly and genial manner had gained for him a wide circle of friends. In literature and art, he took a keen interest, and was Editor of “Alma Mater”. A slightly dilettante attitude concealed to some extent his more solid characteristics, but the war swept aside what was never more than an attractive pose and brought out the true nature of the man. By his friends, Macpherson will be remembered as an example of the best type which the Scottish Universities produce.

A wonderful source of information for WW1 research is De Ruvigney’s Roll of Honour 1914-1918. Now online, I am proud to say I own a set and have spent many an afternoon looking through its pages. Luckily enough JCM is included along with a picture so I can see what a handsome man he was. This entry also includes more information than his university entry. 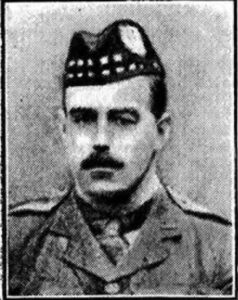 MACPHERSON, JOHN COOK, 2nd Lieut., 3rd (Reserve) Battn. The Gordon Highlanders. 3rd s (son) of the Reb. Robert MacPherson, D.D., V.D., Minister of Elgin, by his wife, Catherine Duff, dau. of the Rev. George Cook D.D., of Kincardine; b (born) The Manse, Elgin, 30 Jan. 1886′ educ. Elgin Academy; Aberdeen, and Edinburgh Universities, where he graduated M.A. in 1910, and subsequently LL.B.; was Assistant to the Solicitor of the North British Railway Company; joined the 9th Battn. Royal Scots (T.F.) as a Private in Sept. 1914, after the outbreak of war; was gazetted 2nd Lieut. 3rd Gordon Highlanders, 6 March 1915; went to France in July, 1915, and was killed in action near Hulluch 25 Sept. following. The Chaplain Reb. Alex. M. Maclean, C.M.G., attached 1st Gordons, wrote: “When the order was given to advance, the Gordons sprang as one man from their trenches. They swept on to the German lines like a torrent. The right-wing found the barbed wire smashed to atoms by artillery and walked straight into the German trenches. The centre and left-wing found the barbed wire intact, possibly because of some depression in the ground which diverted the artillery fire. The night before this was noticed, and an engineer party detailed to deal with it; but unfortunately, they got knocked out before the work was done, and in the dark nothing could be seen. The wire was five feet high and about eight feet broad – a tangled mass only a few yards from the German loopholes. The Gordons charged right up to this formidable barrier. They tried to get over it, to get under it, to get through it, but not to go back. They died there on the wire, and your son and the foremost of them. His body was found by a gallant party which crawled out in the dark the night after and brought him in… Your son is buried with other officers just behind the line in what is called Sanctuary Wood. The exact spot is registered and marked by the Graves Registration Commission. His funeral was a soldier’s funeral, very reverent and solemn.” 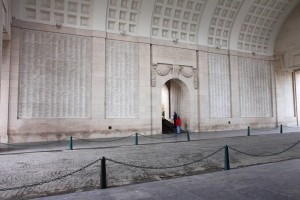 In the extracted letter to JCM’s father, it tells that JM was buried at Sanctuary Wood. I now have been hit by the curiosity bug as the CWGC have JCM having no known grave and being remembered with thousands of others on the Menin Gate Memorial to the Missing in Ypres. The CWGC details for the memorial doesn’t mention anything about why this information differs. However, when I looked at Sanctuary Wood Cemetery information there was the answer.
There were three cemeteries at Sanctuary Wood before June 1916, all of which were made between May and August  During the Battle of Mount Sorrel, these cemeteries were all but destroyed. Hence, JCM being remembered in Ypres. There were traces of the second cemetery later found and this formed the start of the present-day cemetery.

The Scotsman of Wednesday 6th October 1915 includes the death notice for JCM, followed by the Aberdeen Press and Journal issue of Saturday 4th November 1916 tells that Aberdeen 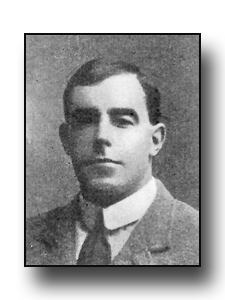 J C MacPherson from the University Roll of Honour

University was compiling a Memorial Number of ‘Alma Mater’ worth of Aberdeen University and its glorious war record. No fewer, at the time, that 42 admirable portraits had been given of graduates and students who had made the supreme sacrifice. JCM was one of 2,852 University staff, students and alumni who served in the First World War, of which 341 lost their lives.

Does John Cook MacPherson have a place in your family tree?