I’ve always thought that Scotland has a vast number of beautiful cemeteries. Beautiful not only in the memorials they contain and how they are laid out but what they look out on – a beautiful hillside, swathes of farmland or stunning hillsides. 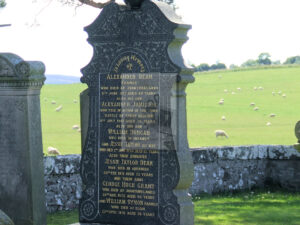 Cluny cemetery in Forres is one that I particularly feel drawn towards due to its setting. Another is Urquhart cemetery which is overlooked by fields and is where my grandparents, and aunt and uncle rest. Whenever I walk around both the old and new sections of Urquhart cemetery I see familiar names and places. The names include Douglas, Hay, Petrie and of course, Riach. The places, well Inchbroom, Innes Estate, Bogmoor and Nether Meft all bring back very fond memories of spending time with my grandfather at Rutherhill, Lhangbryde.

Alexander Jamieson Dean – could he be in some way related to a family friend who had the surname Jamieson? Anyway, Alexander Jamieson Dean was 3 months old when the census enumerator called on the family home in 1891. The enumerator that day recorded the names of nine people – Alexander (34) and Jessie Dean (24) Alexander’s parents. Then there was Robert Dean (22) Alexander’s (Snr) brother. Then there were servants ranging in ages from 35 down to John Young aged five.

Ten years later in 1901, Alexander had four siblings. As well as a domestic servant the farm had a cattleman, shepherd and horseman. Young John Young had gone – could he have been connected to one of the female servants who no longer worked on the Jointurelands farm?

During his school years, AJD attended Elgin Academy then returned to full-time work on the farm.

The peaceful time on the farm was soon to be interrupted as the summer of 1914 quickly came around.

AJM joined the Seaforth Highlands, the 1/6th (Morayshire) Battalion, raised in Elgin in August 1914 as part of the Seaforth and Cameron Brigade. The 1/5th (Sutherland and Caithness) and 1/6th both landed in France as part of the 152nd Brigade in the 561st Highland Division in May 1915 and served on the Western Front.

Alexander initially served as 4517, then after changing battalion, company or some other change to his service his number became 267076. He enlisted after 1914, as he was only eligible for the British and Victory Medals.

AJM and his fellow soldiers served in Belgium in the 3rd Battle of Ypres – The Battle of Passchendaele. Fought from July to November 1917, the bloody and muddy battle was to take control of the ridges south of Ypres.

Alexander’s death in the Army Register of Soldiers Effects is ‘on or since’ te 31st of July 1917 ‘Death Presumed’. His mother, Jessie was to receive £6 19s 6d in October 1918 followed by a War Gratuity payment of £3 in December 1919. Early in the morning of 31st July 1917, the Battle of Pilckem Ridge began. Could AJM have been killed in this battle? Pilckem is only a few miles north of where he rests in New Irish Cemetery. According to the information for New Irish Cemetery it appears that many graves were brought in to the newer cemetery, this included Pilckem Road Cemetery.

After the war Jessie (Taylor) Dean applied for a pension – I don’t think her claim was all that successful! 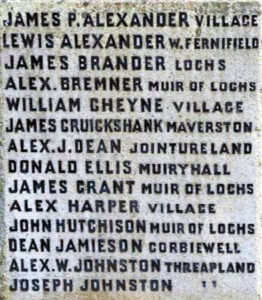 As well as being remembered on the Scottish National Roll of Honour, AJM is remembered locally in Urquhart, the village of his birth, Elgin Academy and the Morayshire Roll of Honour where his entry reads –