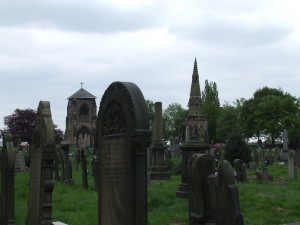 The third in the series of headstones, photographed while walking the cemetery photographing headstones for a forthcoming project.  This headstone does not form part of the project but, like a few others, it seemed to stand out!

The very simple and clean looking headstone, with the odd piece of damage just above ground level, is to George Perkin and his wife, Bridget.  Why did this headstone stand out from the rest?

Most headstones give details of a names,  dates of death and if you are lucky, dates of birth. Some, will give a clue as to armed service, while others tell of an occupation, a town of residence or area of birth – information that the deceased or their family were proud of and wished the visitors to the cemetery to see and take note of.

George Perkin’s family were one such family as his headstone proudly displayed his occupation, that of ‘gravestone letterer’.  George died on June 17th 1897 aged 69. But who was he in life? 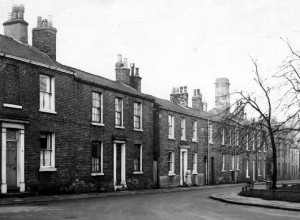 George was born around 1828/9 in Wakefield. Working backwards, as we only have two names to work with. A look in the nearest census to George’s death, the 1891, we see George aged 63 and his wife Bridget aged 59, living at 2 Rishworth Street, Wakefield. George gave his occupation as ‘retired monumental mason’.  Ten years earlier, 1881, the couple are still living on Rishworth Street, his occupation now being described as ‘gravestone letterer’.

On April 14th 1873 George married his Bridget nee Fearnside. The entry in the church of St John’s, Wakefield tells that both were of full age – George was around 45 years of age. He was living in Rishworth Street and his father’s name was given as William Perkin, a mason.  Bridget’s father was David Fearnside, a blanket manufacturer, living on Northgate – just around the corner from Rishworth Street.  The witnesses to the union were Frederick Kitson Perkin (Kitson was his grandmother’s maiden name), and Ann Ashton. There are two entries in the parish registers for that day, both preceded over by Edward Bell – the first wedding of the day was for George and Bridget and the second was for Harry Mountain and Ann Longbottom.  Reverend Edward Bell, seems to have changed his writing for the second ceremony, seeming a little rushed, having larger writing and not as neat.

Two years earlier in 1871, George is at Rishworth Street, the head of the house and living with his unmarried sister, Mary Ann and Sarah A Fletcher, his niece.  George tells the enumerator that he earns his living by being a ‘gravestone cutter’.  The 1861 census sees George and his siblings living with  Margaret, their widowed mother, still in the same house, on Rishworth Street.  Margaret, aged 58, gives her occupation as ‘provided for by her children’.  George tells he is a ‘stone mason, gravestone cutter and **** at St John’s Church’.  Other sons are working as ‘clock and watch maker’ and two sons are a  ‘mechanic at the local iron foundry’.

Ten years earlier in 1851, there is still no sign of George’s father.  Margaret is now aged 47 years old and on ‘parish relief’. George, aged 24 is a stone mason, as is his brother Henry.  While, Charles aged 21 is a ‘tobacconist’s assistant’ and Edward aged 14 is an ‘errand boyh’.  The remaining five children range between 4 and 11. The age of the youngest child could hold the key to when their father died!

After working back for many decades the 1841 census gives the information – George and his siblings father. Living on South Street, William Perkin, ‘stone mason’, aged 35 (remember the ages are more than likely rounded up in this census).   The Freebmd collection of death’s has two entries for a William Perkin in the Wakefield area.  The first is the March 1/4 of 1849 and the second is also in the March 1/4, but the following year, 1850 – which one is Margaret’s husband? That information is not needed at this time as George and Bridget are the focus of Sugar Lane iii. 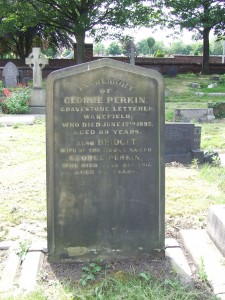 An entry in the Probate Registers, tells that George Perkin, gentleman, had Probate granted on the 13th of August to Bridget Perkin, Frederick Kitson Perkin, silversmith and jeweller and Henry Turner gas-fitter.  Effects £2709 10s 2d.

Bridget lived on to see two more decades, dying on the 21st of July 1912 aged 80.  Probate for Bridget was granted in the August, to Herbert Caress, schoolmaster and Walter Lumb, butcher.  Effects £1625 5s 5d.

Bridget died in the year that the Titanic sank. The year that Lawrence Oates, leaves the tent of Scott’s South Pole expedition, never to be seen again.  The year that the first non-stop flight from Paris to London was made in just 3 hours, and  Harriet Quimby became the first woman to fly across the English Channel. The Piltdown Man, the famous hoax, claimed to have been found in this year.   This was the year that Suffragettes smashed shop windows in London’s West End.  The movement were in the headlines and would be the following year when Emily Wilding Davison by giving her life for her beliefs.