If you have read my previous blog about the college, you may be interested to know about one more Epsom College man who fought for their King and Country.

There are many men recorded within the pages of the Epsom College Register 1855-1905. Many followed in their father’s footsteps and joined the family firm or joined the political services, or even worked for international banks or businesses, while others joined the military as a career. But it is not a career man who is the focus of this entry but a man who was an architect.

Who is this man, with a name that seemed so interesting as to tempt me to tell you about him? William Leonard Boghurst Leech, a name that doesn’t seem to trip off the tongue but still commands attention.

William, for short, had his birth registered in the last quarter of 1887, in the Stow Registration District of Suffolk, being born in Woolpit, Suffolk. He was the son of Albert H Leech, a Registered General Medical Practitioner, also born in Woolpit, while Annie M was his mother.  In the 1891 census William is three years old and his younger sister, Emily M is one year old.   I had been looking for a marriage for Albert and Annie M, but after a few searches, gave up – it was not that important.  But, what do they say about people who wait?  Well, I waited and the 1891 census handed me her maiden name upon a plate or a census sheet!  Also living in the house, ‘White House’, Woolpit are two other ladies, listed after three servants.  Who are these ladies?  Frances Boghurst, widow, are you getting a clue now?  Frances was Annie M’s mother. Also in the house was Agnes J Boghurst, Annie M’s sister. Don’t you love it when everything just comes into place! 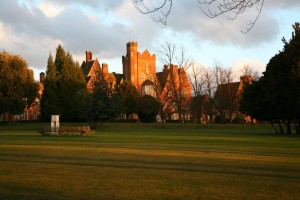 Ten years later Master Leech was 13 years old and what a merry chase he led me while looking for him in the census.  Eventually, he gave in and there he was, Leech, Wm. Leonard Boghurst, as a pupil in Epsom College, College Road, Epsom.

The enumerator’s book describes the institution as ‘Epsom College, A School with Masters & Pensioners detached Houses’. At the time of the census, Thos. Northmore Hart-Smith was the Head Master, who gave his occupation as ‘Head Master, Clerk in H O, Ch of E’ (Clerk in Holy Order, Church of England).  The college was founded in 1855 with the patronage of Her Majesty Queen Victoria.  The founder, Dr. John Propert raised funds to help orphans and widows of the medical profession.  The Royal Medical Benevolent College opened its doors and gave education to more than 100 boys in its first year.  William’s entry in the College Register list his parent as Mrs Leech, Seven View, Coalport, Trowbridge, Salop., so it looks Albert had died prior to 1905 when he left the establishment.

By 1911, William has left Epsom College (he left in 1905), and can be found by his full name, living at 5 Waverley Street, Nottingham, in the home of Mr Walter Snushall and his wife Sarah Anne.  Walter is a brewer’s agent but also in the house is Kenneth, his son; Noel Hartley West an insurance inspector and his wife, Dorothy; Henry Alderman Dickman and William, who are both architect’s assistants, followed by Bridget Mary Doyle, a 21-year-old servant from Dublin.  The house on Waverley Street had 10 rooms, so there may only be a little bit of sharing!  We know William was an architect’s assistant but he eventually became an Associate of the Royal Institute of British Architects.

It was just over three years later that war was declared and men volunteered to fight for King and Country as ‘it would be all over by Christmas’.  William at this time was living in Ealing and enlisted in London, joining the 9th (County of London) Battalion (Queen Victorias Rifles), becoming Rifleman 3407. 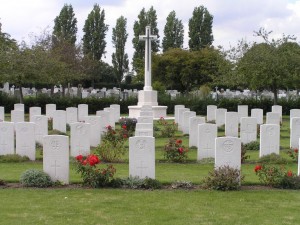 William’s regiment had served in France from late 1914, but it was only May of 1915 when he had been wounded in Flanders and sent home to England.  William died of wounds received in action on the 14th of May 1915 in Fort Pitt Military Hospital, Chatham.  He rests in Sutton Road Cemetery, Southend-on-Sea along with 280 identified casualties.

The Medal Card for William was also not as simple to find as you might think, and was only found by using his service number as he was 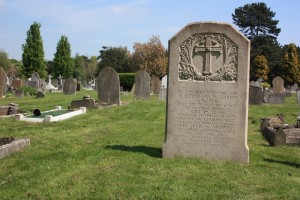 recorded and transcribed as LEACH W.L.V.   Anyway, his service number was correct, as we know as was his regiment and his date of death.  The card did not have much more information to tell, but there was a note from the regiment asking how to dispose of the 1914-15 Star.

Record No. 189636, Registry No. E(?)/84872/1 in the Army Register of Soldiers’ Effects tells confirms his full name, regiment, date and place of death and confirms that all his outstanding monies from the army will go to his mother, Annie M.

Probate for William of 28 Edgerton Gardens, West Ealing, was granted in London on the 17th of June to Annie Madaline Leach, widow (we now know his mother’s middle name), with effects of £1951 18s 1d.  This was revoked on the 18th of November the same year and further granted on the 8th of February 1916.

I had looked for Albert and Annie M’s marriage but seemed to fall short of an entry, now I had the information of Annie’s surname and middle name, all fell into place.  Annie Madaline Boghurst married Albert Herbert Leech in the late summer of 1886 in the Tendring Registration District.