Heritage Weekend, September seems such a long time ago! 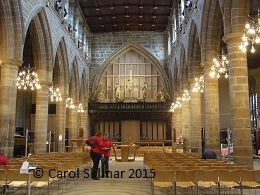 During that weekend up and down the country, places that are not normally  open to the public, throw open their doors for us to peek inside. These buildings organise volunteers, some provide refreshments and talks. While others just leave their buildings, mainly churches, open – how wonderful is that? 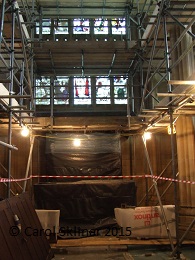 What did I get up to?  Normally I plan where I want to go, sometimes it seems like a military operation!  This year, due to limited time, I was hoping to ‘kill two birds with one stone’.  Well, that was the plan. So, I headed off to Wakefield Cathedral.  I’m not a great lover of the ‘new’ layout, but I can understand why all the pews have been removed and replaced with chairs.

The building was partially closed due to a continuing programme of work behind the rood screen. But guided tours of behind the scenes were being offered and that fell in nicely with my need to photograph a memorial, as additional information for a project……….looks like everything would go to plan.  What do they say about the best laid plans? 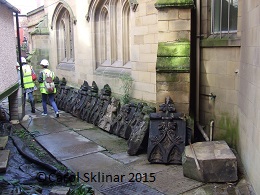 After signing our life away, opps, waver, myself and two others donned our fashionable hardhats and followed our guide outside the building, behind Treacey Hall and entered by the side door that takes up into to the Cathedral or down to the rooms below.

As we entered the closed area there was scaffolding everywhere.  The stonework and woodwork had been completely covered for protection in either sheet board or thick plastic.  To our right we could 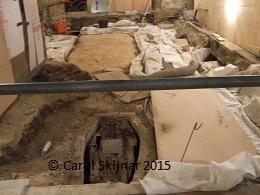 Excavated floor showing one of the coffins

see that part of the floor had been removed and excavated exposing three coffins.  One was quite close, the coffin was not in a bad condition to say where it had been and now long it had lain beneath the floor.  Another coffin lay had been protected by wood sheeting as a pipe had been placed over it for the duration of the work.  But, beside the pipe a small room had been found.  Sadly, due to good old health and safety, we were not allowed to venture inside. 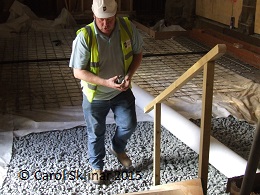 Our guide certainly knew his stuff, keeping his audience captive while he told us about the building work and the differences between the old renovation techniques, which must stay, and the modern sympathetic ways of preserving.

Our tour ended, but there were not many questions to be asked, as we were a small group it was easy to just chip in and ask questions as we went along. The tour lasted just under an hour and was well worth venturing into Wakefield on that September Saturday afternoon. 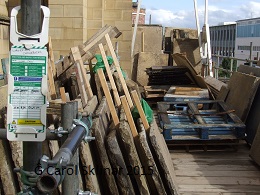 Headstones stored outside ready for putting back inside

If you remember I was also going to look for a memorial.  Did I find that memorial, you might ask. Well, remember the best laid plans of mice and men…………..No, the memorial remains unfound, hidden behind sheet board or plastic and will remain so until around Easter 2016, when another visit is needed.