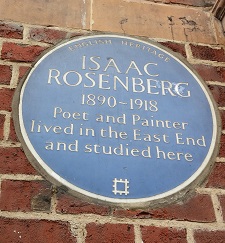 Following on from the last entry, it is now the turn of Isaac Rosenberg.  I found the plaque to Isaac about 12 months ago and was prompted by writing a small piece about Anna Maria Garthwaite yesterday.

I had come across Isaac before with my interest in WW1.  He had also been part of an Open Learning course I had completed last year.

Who was Isaac? He was a poet and artist.

Isaac was born in 1890, one of six children to Barnet (Dovber) and Anne (Hacha).  His twin brother died at birth.  His parents were Latvian immigrants.  Barnet, in the 1891 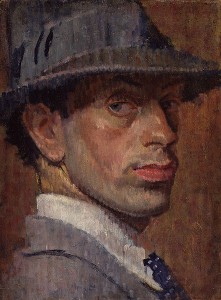 census was described as a Drapery Dealer and was the father of two children.

Ten years later in 1901 the growing family are living on Jubilee Street, Mile End, next door to another Rosenberg family.  The head of the house is of an age to be Barnet’s brother.

By 1911 Isaac  is 20, and described as an artist.  His parents have been married for 30 years and have had six children – no mention of Isaac’s twin on the census, who is mentioned in some sources.  Home for the family is a four roomed house – 159 Oxford Street, Stepney.

War broke out and Isaac enlisted in London, joining the Suffolk Regt., as a Bantam due to his stature. being under 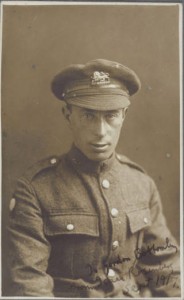 5″ 3′.  He was transferred to the Lancashire Regt., and finally transferring to the King’s Own Royal Lancaster Regt., He was sent to the Western Front in June of 1916 and during this period wrote and sent home poetry to his family, including Day Break in the Trenches

During several periods of sickness he was removed from the front lines and transferred to various duties, including delivering barbed wire to the trenches.

In March of 1918, being sent to the front lines with reinforcements, he was killed while on a night patrol with ten other men.  He was initially buried in a mass grave but re-interred at Bailleul Road Cemetery in 1926.  Marked with his name, rank, regiment and service number, his headstone also has the Star to mark his religion, the words ‘buried near this 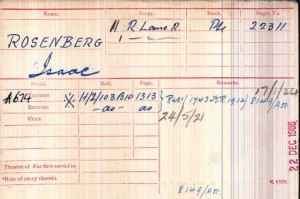 spot’ and near the bottom ‘Artist and Poet’.

Isaac’s father, Barnet was the recipient of monies owing and his War Gratuity, which was all finalised by September of 1919.