Flockton Soldier Missing – Believed to be a Prisoner of War

Wakefield Express 28 August 1917 – Mr and Mrs Walter Wilkinson, Council Buildings, Flockton, have received information from the War Office that their eldest son, Private Albert Wilkinson, R.A.M.C., is missing, and believed to be a prisoner of war.

Private Wilkinson enlisted on October 11th, 1915, and went out on January 1st, 1916.  He had had no leave since he joined. Prior to enlisting he worked at the Emley Moor Collieries.  In a letter to Mrs Allen Marsden, Flockton, Private G C Clark, of Fitzwilliam, writes and says he was a particular pal of Private  Wilkinson, and he has been missing since July 10th.  In describing the battle Pvte Clark said it was ‘hell on earth’. and everyone who got away was very lucky indeed.  The opinion of all after  the battle was that very few missing would be alive.  anyhow he hoped his pal was a prisoner of war. 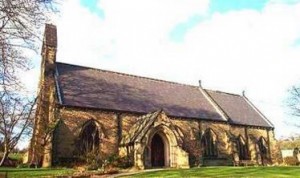 Walter and his wife Ann, were living at The Green, Flockton in 1901.  Walter, a coal miner, was a Flockton man and his wife Ann, was from near by Grange Moor.  Walter and Ann Hinchcliffe married on the 25th of November 1893 at St James’s Church, Flockton. Their family consisted of Mary, Edith, Albert and Annie E., and with the aid  of the census, it seems that Albert was born c.1897.

Ten years later, in 1911, the family had grown a little – Mary, Edith, Annie, Albert Freddie, Maggie and Willie.  The census has been amended a few times as whoever wrote the information used girl and boy instead of daughter and son.  Walter was now a night labourer, amended to Lamp Man (Colliery).  Albert now aged 14 was a Trammer mine, with the addition of Below Ground, Coal Mine.  His two older siblings, both girls, worked in a worsted factory. Home for the family of 9 was a five roomed house at Oaker Hill, Flockton.

The information from the small newspaper article tells his regiment and his rank.  Now comes the important question.  Did Albert come home to his family alive or was he one of the many who remain in a foreign land?

A search of service records and pension records came up with entries that gave no confirmation that the records were for Albert.  The Commonwealth War Graves Commission lists, again gave no clue in the additional information, as to parentage or home town. 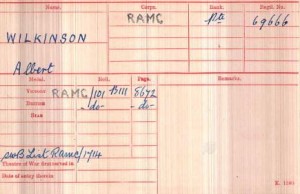 As yet  the service number for Albert is unknown, but a look at the Medal Card Index, gives two Albert Wilkinsons in the R.A.M.C. – not bad odds!  On opening one the rank is Corporal, while the other is for a Private Albert Wilkinson.  It is known that he was in a battle, so the Medal Card for Private, 69666, Albert Wilkinson, with the addition of a SWB (Silver War Badge), could be a winner!

Albert Wilkinson, Silver War Badge number B339193.  Albert enlisted on the 11th October 11915 and was discharged on the 28th of March 1919 after being sick for a time.  The document also confirms that Albert served abroad.

It looks like the important question can now be answered, YES, he did survive, and survive he did so until the 1970’s.

As to whether or not Albert was a prisoner of war, I don’t know………..but if you do, please let me know.