John William Bryant in 1881 was living with his parents, William and Susannah Bryant. Home for the family of 8 was Nursery Grounds, Rugby.  Also, in the house on census night was, Emily Coleman, a servant and  John Williams maternal grandmother, Mary Ingram, a 55 year old widow.  Mary, like her son-in-law, is described as a nursery and seedman. William has the added information of how many acres he works and how many people worked for him – he had 9 acres and employed 13 labourers and 1 boy.

When the census was taken on the night of Sunday the 2nd of April, William and Bertha were parents to 7 children – of which six were living at home – the eldest being 13 and the youngest 4 months.   John W was a self employed Carpenter and Joiner.  Home for the family of eight was 98 York Street, Rugby, a six roomed house.

War was declared and John W enlisted at St. Andrew’s, Rugby, where he joined the Royal Warwickshire Regiment.  His service number was 308 and he rose to become a Company Sergeant Major.  He was 41 years of age when he was Killed in Action 100 years ago today. He is remembered on the Thiepval Memorial to the Missing. 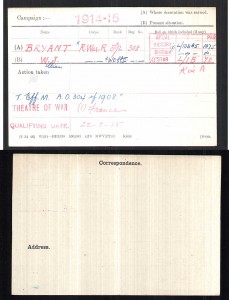 The Register of Soldiers’ Effects gives details of service number, rank, gives all monies owing from the War Office to his wife, Bertha and also notes where John  died ‘ 25.7.16 in the field France’. John’s Medal Card tells that he qualified for medals from 22nd March 1915. The following is also written in blue ink across the bottom of the card ‘T Eff M A O 304 of 908’.