While assisting with a Western Front Association project I happened upon a few local people, one of which is James W Hudson.  The project was for members to look at each of the Pension Record Cards looking for ‘alias soldiers’ – soldiers who served using more than one name. 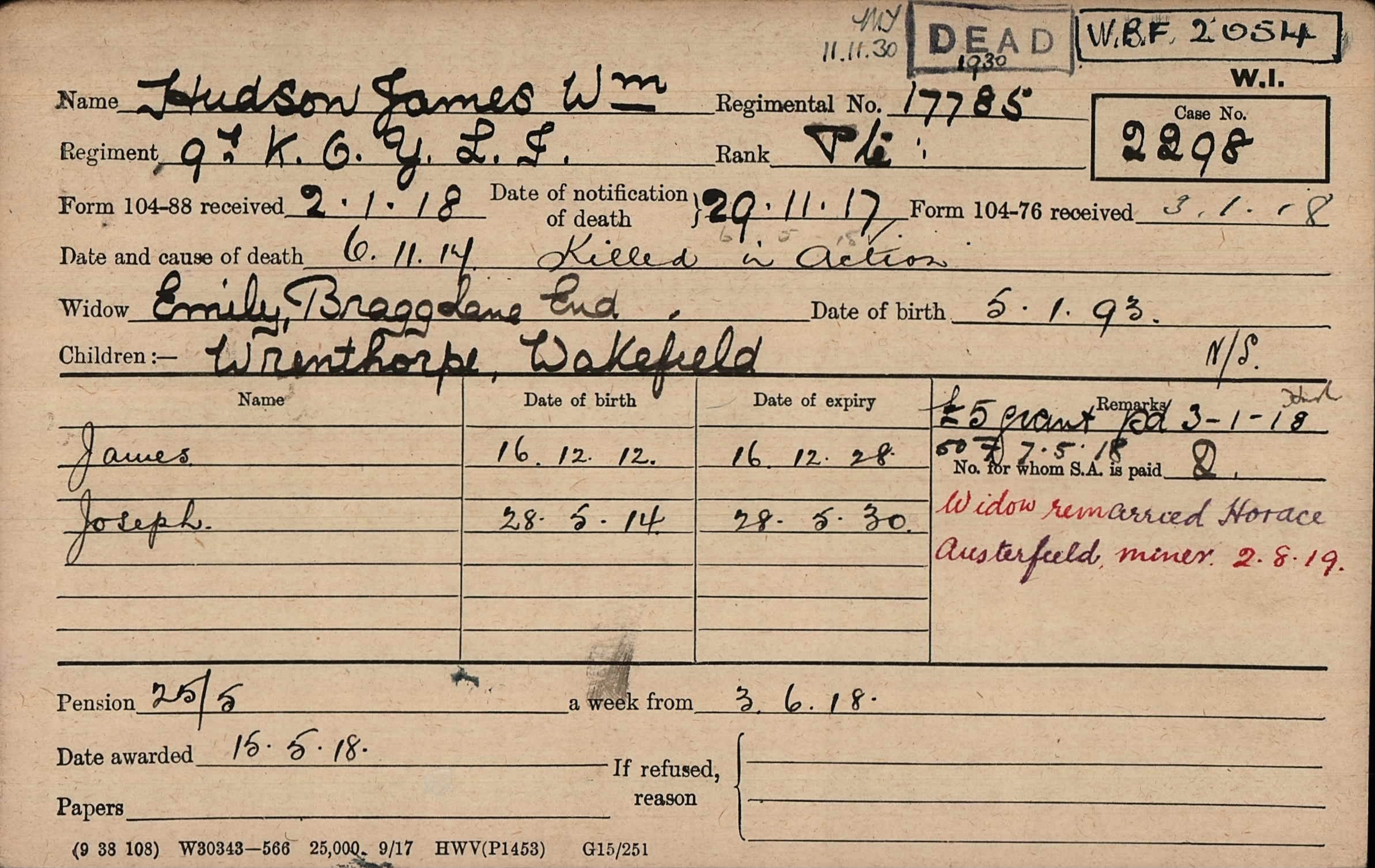 Pension Card for James Wm Hudson from the WFA collection

In late 1917 James Hudson would have received the news that his son James William had been Killed in Action.

James and his second wife Zillah had married around 1898. Zillah became stepmother to James William and Gertrude, aged 21 and 16.

In 1911 the original family were living at Bragg Lane End, Wrenthorpe. James, his first wife and James William relocated to Wrenthorpe before 1895 as Gertrude was born there. James William, like his father, was working as a miner,

In 1911 the original family were living at Bragg Lane End, Wrenthorpe. James, his first wife and one of the many local mines.

Although mining was a ‘Scheduled (or reserved) Occupation’ during WW1, James William did enlist. I wonder what his wife, Emily Mellor, who he had married in 1912, would have thought of that? James W enlisted in the KOYLI’s as part of Kitchener’s Army and served as Private 17785, but before enlistment, he had become a father to two children – James born in December 1912 and Joseph born in May 1914.

The 9th Battalion, of which James W was part saw many of the now infamous battles of The Great War. In 1917, they were in action during the German retreat to the Hindenburg Line, the Arras offensive, the Third Battle of Ypres and The Cambrai Operations. But it was on the 6th of November 1917 that James W’s war came to an abrupt end when he was Killed in Action. There is no grave for James W, no little piece of England in some foreign land with a marker to pay your respects to. There is only a name on a wall – one name in over 3500 who are remembered on the Tye Cot Memorial, Belgium. 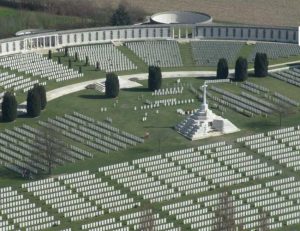 W’s medal card provides a little insight into when he enlisted as he qualified for the 1915 Star as well as the Victory and British Medals.

As well as receiving his medals, Emily would have received about £14 from the Army in two allotments, 1918 and 1919. She was also eligible for a grant and a small pension for herself and her two children. The money (pension) for her two sons stopped when they reached 16 years old. But Emily’s pension discontinued as soon as remarried, which she did on the 2nd of August 1919 to Horace Austerfield, another miner.

lives of Emily and Horace continued after the war and as a couple, they went on to have children.

When the time came around for the 1939 Register to be compiled Emily and her husband were living at 267 Bradford Road, Wakefield, along with some of their children and James, Emily’s son from her first marriage to James William Hudson.

As of September 3rd, I wonder if Emily cast her mind back to 1914. Or did she remember 1915 when James W would have gone to serve his country and pay the ultimate sacrifice?

Emily died in 1957 and Horace joined her the following year.  They both rest within the boundary of St Paul’s churchyard.

The WFA has over the past few weeks had a small army of volunteers viewing every one of the thousands of Pension Record Cards looking for ‘alias’ soldiers. There is a surprising number of soldiers who served under an alias.

What information is there on these cards? On every card is the soldiers’ name, his serial number and regiment along with various case numbers and re-directions to other military paperwork. Along with the change of regiments and service numbers and rank. There could be quite a few words struck through.

I want to tell you about what you in the majority of cases you may find.

The cards change in style and space for information varies. For this purpose, I’ll take what I call a ‘fully loaded’ card and explain what information can be available.

With a Service Record not being available where would you look for personal information? Until recently, not a lot of places.

Let us go back to the information held on the Pension Cards. The date of death is important as a search of the Commonwealth War Graves Commission website is then possible which will give a place of burial or commemoration.

A cause of death is always of interest and in these cards, the cause of death has been in some case quite blunt. Some causes of death include: drowned (including the name of vessel), pneumonia, cholera, cancer, as a result of an accident, epilepsy, gunshot wound to neck – self-inflicted and the list goes on.

A relation is information well worth having and could include a parent, wife (widow) other relation or guardian each with an address. You may be surprised to find that elusive wife or parent with an address in America, Canada or Australia – another avenue for you to follow You could also find that the named relation died or remarried and additional information is included. If there was a re-marriage there may be the included the new husbands’ name, occupation and date of marriage.

Children – a full list of children including dates of birth and when their pension allotment expired. You could find that the children have been placed in the care of the Board of Guardians in various townships up and down the country.

One of the interesting bits of information is the pension awarded and how long for. In some cases, it is a matter of shillings for a limited time. While a small number include the pension will be for life. Another interesting item and again the military tell it as it is – if the couple were separated, the information you may not be privy to as it has never been spoken about – until now! The military could be quite brutal in the way relations were treated.

If a soldier was a prisoner of war this information could either be stamped or handwritten across the card.

There are a few cards, and I do mean a few cards where the information continues on the reverse and all adds to what you have already found.

When you disregard the possibility of a detailed account of a soldier in a newspaper account and the lack of a service record, there are not any records sets that include such useful and interesting information as the Pension Record Cards. Where else would you know a cause of death (KIA or DOW is not always precise), if a wife remarried or the couple separated or even a wife’s new address or country? You may also find additional children, step-children or a couple was not married.

So much information can be found and add to what you know about your soldier(s).