While looking through online newspapers I found the following article interesting.

Who was this man mentioned in this short article?

The Yorkshire Evening Post of Monday 20th of March, 1916 tells:- ‘Soldier’s Funeral at East Ardsley. The burial, with full military honours, of Sapper Harry Hick, took place at East Ardsley Churchyard, on Saturday afternoon. Deceased, who died on Tuesday last, at Farnborough Camp, leaves a widow and two children. A firing party, under Sergeant-Major Spink composed of comrades in deceased’s company of the Royal Engineers, came from Aldershot, and a beautiful wreath was sent by the officers of the regiment.’

Sometimes curiosity overtakes me and the smallest amount of information can get the research juices going. I recently found a great deal about someone from just his name on a broken kerbstone, and believe me he had a wonderful and fascinating story to tell. 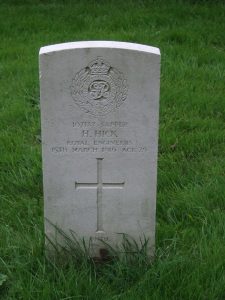 What do we know so far about Sapper Hick? Well, he was a soldier, a Sapper, which meant he was in the Royal Artillery. He was married, and a father of two. Lived in the East Ardsley area or his family lived there. And, it seems he was a well respected by all ranks.

My first internet stop was the CWGC (Commonwealth War Graves Commission) website. I chose this step first as to lessen the as there would only be one man named Harry Hick in a CWGC grave in St Michael’s Churchyard. From here I obtained his service number, company, and the names of his parents and wife’s names, plus his wife’s address at the time information was given to the CWGC. Not bad for just one search. My next step was to search SDWTGW (Soldiers who died in the Great War), this would hopefully give information as to where Harry was born, lived and enlisted and the type of casualty i.e. killed in action, died of wounds etc.,

Sapper Hicks, according to the SWDTGW was born in Lofthouse and enlisted in Wakefield – joining the Royal Engineers as Sapper 107187, serving in 229th Field Coy., (Company). Harry’s type of casualty was simply ‘Died’ ‘At Home’. Harry died in the U.K., therefore his place death on some documents would say ‘At Home’.

Leaving behind military information for a time, let me take you on a journey through the census and Parish Registers.

In 1901 Harry is a 14 year old young man employed as a labourer being born in Robin Hood. His parents were John William Hick and his wife Harriett Annie.nee Jarratt, whom he had married in the summer of 1875 in the Wakefield Registration District. John William was at the time 47 years old, born in Cross Flatts, Leeds, being employed as a Journeyman Blacksmith. Harriett Annie was a few years younger, aged 43, born in Thornton. Harry was the fourth child of seven, aged from the eldest aged 21 to the youngest aged five. His brothers and sisters were all born in Robin Hood except the last two who were born in Lofthouse and Lingwell Gate, Stanley.

It seems that when it came for Harry to marry his wife Annie McAlister Kennedy there was just a little ‘hitch’. Both families turned up at the Primitive Methodist Chapel, Market Street, Wakefield on the 18th of June 1910. Harry aged 23, of 5 Wolsley Terrace, East Ardsley, turned up. Annie, also attended – aged 24 living at 114 Woodhouse Lane, Leeds. She was the daughter of the late John Kennedy, a carpet weaver. Witnesses John Marshall and Edith Hick were also there. The entry was signed off by D. D. Waters, Authorised Person for the said Chapel. BUT! There always seems to be one of those, doesn’t there? 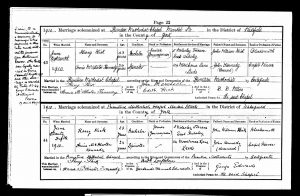 A handwritten note in the space at the side of their entry in the Parish Register tells ‘ Owing to a misunderstanding a ceremony of marriage was performed as this entry made without the presence of an Authorised Person. The Parties were legally married on June Twenty Firth 1910 and their Marriage was recorded as Entry No 44. George Edwards, Authorised Person of said Chapel’. It looks like D. D. Waters was not as authorised as he thought he was!.

So, on the 25th the couple take their place again at the front of the church, all seems the same, except – Frederick Laughton and Gertrude Harriet Edwards were the new witnesses and George Edwards was the officiator. Did the couple have their wedding breakfast on the 18th as the family were witnesses at the chapel, and the 25th was just a formality with the witnesses being needed just for legality.

By the census of 1911 24 year old Harry and 25 year old Annie had been married for under one year, with no children. Harry was a joiner working on his own account. His place of birth still being Robin Hood. Annie’s entry reads ‘NB, Ayrshire, Kilmarnock’. As she was not born in England or Wales, ‘(Resident)’ was entered in parenthesis. Home for the newlyweds at this time was Jeffrey View, East Ardsley, a 2 roomed terrace house.

From the newspaper entry, we already know that the young couple had two children. In the September ¼ of 1911, John Hick was registered, followed by Annie registered in the June ¼ of 1915. By the time of Annie’s birth the Great War had been going on for a while now, and it hadn’t been over by Christmas.

It’s now time to return to military records, some 30+ pages of them. Some are duplicate, some have been damaged by water and fire. Nevertheless, they are interesting and complete the life of Sapper Harry Hicks.

On the 8th of November 1915, Harry Attested. He gave his address as 27 Newton Hill, Wakefield, and his age as 29 years 3 months. The next page gives Harry’s height as 5′ 6”. He has a chest fully expanded of 35”, weighing 114lbs. His physical development is classed as good.. His date of marriage is confirmed as the 25th of June 1910, not the original date of the 18th when all the family turned up in Market Street. His two children’s date of birth is given – John’s being 7th of August 1911 in Wakefield and Annie being born on the 12th of March 1915 in East Ardsley.

Harry was posted to Aldershot. On the 10th of March 1916 he was admitted to hospital with Cerebrospurial fever (sic). A doctor’s note tells ‘An acute attack of cereb** spinal fever, with especially marked *** re-infection………’.Harry died on the 15th of March 1916 – just a few day after his daughter Annie’s first birthday. He was in the Isolation Hospital, Aldershot.

Letters and notes would now go too and fro from the MOD to Mrs. Hick. The first of which was to informer her of her husband’s untimely death, followed shortly a note asking if she wished to claim her husband’s body and where she wanted him to ‘be placed at rest’. Harry had died in 1 916 yet the paperwork his death generated was still continuing until 1919.

Annie M Hick of 27 Newton Hill, Leeds Road, Wakefield was in November 1916 receiving 17/6 Separation Allowance and 3/6 Allotment of pay. Annie also received a box of her husband’s belongings which were despatched in January 1917. One damaged document from 229th Field Company Commander informs that some of Harry’s personal effects had not been received by Annie, she had written to the Army asking if these items could be found.

‘1.2.17 6 Jeffrey View, East Ardsley, Wakefield. Captain Hopkins. Sir, I think you for sending watch etc., belonging to Sapper Hick, 107187, R.E. But was disappointed to find most of his things had not come but I suppose they will have been dispersed with his kit which would be at Blackdown, if any more comes to your office, I shall be willing to pay postage for same, I can mention most things he had. Vis, Steel shaving mirror, Black S. mounted Stick (silver mounted), Leather Belt, New Brush, Fountain Pen, about 6 Handkerchiefs, Waistcoat (dark blue), Letters and photos & etc., will be destroyed I expect, thanking you again for your kindness in attending to my letters to you. I Am Yours Truly, Mrs. A Hick.‘ 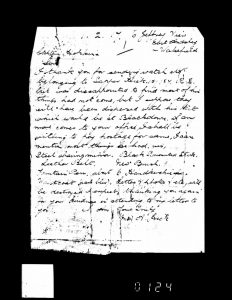 Letter from Mrs Hick asking about her husband’s effects via Ancestry.com

An official memo was generated but the answer was not positive. It was presumed that some of his effects, his letters and photo’s may have been destroyed by the Isolation Hospital staff, Aldershot.

Harry’s burial is entered in the registers for St Michaels, East Ardsley on the 18th of March 1916. The fourth entry above Harry’s is the entry for Harriet Annie Hick of Wolsley Terrace, who was buried dated 57 on the 1st of March. Not only had John William Hick lost his wife, the same month he lost one of his children.

Sapper Hick, seems to have served his war ‘at home’. And according to his recruiter, Harry seems to have been ‘A good all rounder’.

Individual documents give small insights into a life. However, when you put multiple documents together how much more can they tell you about one person’s life.