Are you related to Alice Senior?

Mrs Elizabeth Atkinson of 64 Granny Avenue, Churwell, nr Leeds is included on the manifest as being their nearest relative or friend in the country from which they came.

Why did the two Senior women go to America? Who were they before they boarded SS Winifredianin?

Hilda Broughton Senior was baptised in Morley on the 24th of March 1901 at St Peter’s Church. Alice Senior is her mother but there is no father included on the record. Alice and Hilda at the time lived at 10 Clarendon Terrace.

Ten years later in 1911, Alice is aged 49 and included on the census form that she had been married 25 years. During this time she had born three children of which two were still living. Hilda, now aged 11 was attending school. The small family had moved to 74 Elland Road, Churwell. There is no entry for the missing husband or the other child.

I initially presumed, not a thing to do in family history, that Mrs Atkinson mentioned on the manifest would be Alice’s mother. Alas, I could not find a marriage for an Alice Atkinson to a Senior, but that does not say it is not the case, only that I may have not looked enough.

Anyway, as with most family history stories, the plot thickens, as in 1901 Alice Senior is lodging at 10 Clarendon Terrace – we know that address, don’t we? Clarendon Terrace is where John W Broughton, a 32-year-old widow lives. John also works in the woollen trade, as a piecer. Alice is listed as a boarder, her son, Herbert aged 14 (our missing child) also works in the woollen trade. Finally, Hilda, aged 1. Could this newly found information give a clue as to why Hilda has the middle name Broughton, or am I again presuming that John Broughton is her father! I very much doubt that he is Herbert’s father, so there must be a Mr Senior somewhere, or, was Alice using the title as a ruse?

Back another 10 years to 1891 and living at Wilkinson’s Houses, 54 Elland Road is a widow named Mary Ann Clegg. Living with Mary are two women, the first is Emma Atkinson, now a link to the Atkinson family. The other is Alice senior who is there with her son. So it looks like the Atkinson on the manifest could be another sister for Alice. Also for Alice to be living with her mother and declaring she was married, looks like she must have been, but where is this elusive man called Mr Senior?

Now Alice’s maiden name has come to the fore another search for Mr Senior brings a marriage forward for Alice Clegg to Joseph Senior in the Dewsbury area in the September ¼ of 1886.

I hate looking through the USA census forms, there is no much information you have to scroll sideways to read, while the column titles are so small and difficult to read. But look I must. Hilda Broughton Senior married Arthur Lewis and in the 1930 census for Andover, Massachusetts the couple are listed with their son, Kenneth. Alice Senior is also there. All the adults were born in England while 6-year-old Kenneth is the only American. The family lived in a rented property at 10 Fletcher Street with a square footage of 3,200 ft. The majority of people listed on this page have parents born in either France, England or Scotland.

In the 1940 census for Lawrence, Massachusetts, Alice, now aged 77 is a housekeeper for George Smart, a tinsmith, living at 542 South Broadway. 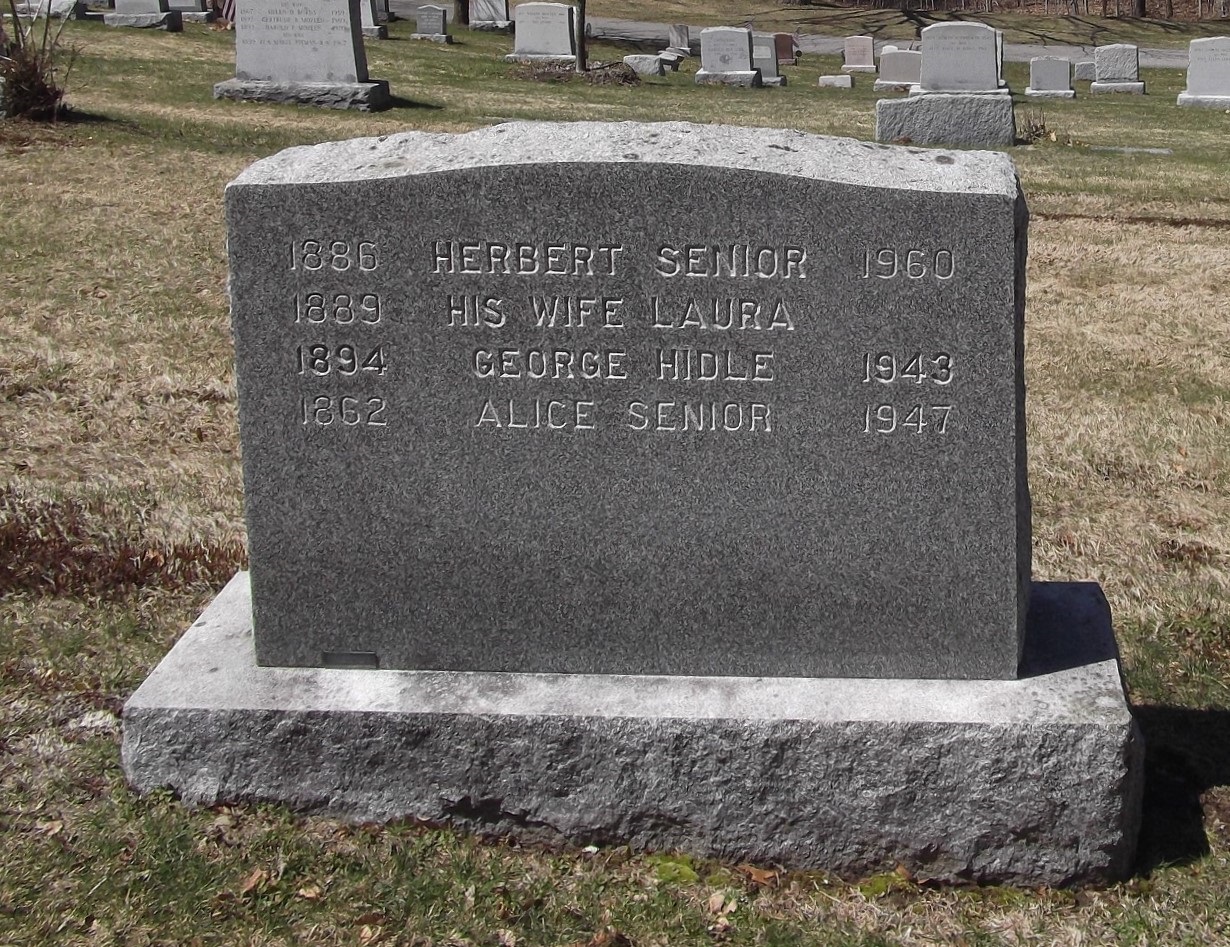 There is a headstone in Ridgewood Cemetery, North Andover for an Alice Senior who had been born in 1862 and died in 1947 – could this be Alice? Also named on the headstone is Herbert Senior born 1886, his wife, Laura, George Hidle. It looks like Alice’s son also went to Massachusetts. Herbert had married Laura Shaw in the Parish Church, Leeds in 1907 where he tells the Assistant Curate, O G Mackie that his father was Joseph a woollen spinner. Both Herbert and Laura had been living at Hoxton Grove, Holbeck. Laura’s father, Fred is marked as deceased – so Joseph must have been alive.

I’ve just skipped over the story of Alice Senior with it taking me longer to put into words than research. The connection to Mrs Atkinson on the manifest has been found. Her new life in Massachusetts has been briefly documented along with that of Hilda. There is, however, one quite important snippet missing. Where is Joseph Senior?

While searching the web for John Younie, a relative who worked in the Indian Civil Service. During his service, he was Superintendent ICS of Chittagong Hill Tracts, later in charge of the Barrackpore Sub Division in the 24 Parangas District. He was later IC Joint Magistrate and Deputy Collector and given orders to act as Cantonment Magistrate in charge of Dum-Dum in addition to his normal duties – looks like he was a busy man. He died while in his courtroom. He is mentioned on various occasions in The Gazette.

There was a newspaper in Google Books which was free, well, I had to view it didn’t I? On the same page as my John Younie in The Pioneer Mail, 22 October 1920, was the following death notice.