Over the past weeks, I’ve been doing a family tree for a friend and yesterday after threatening to go and visit the area and a local museum, off I went.  It was a nice day albeit a little nippy – my hands were feeling the chill while taking photographs in the churchyard…. but you carry on for the cause!

So, it’s 12:15 and the museum opens at 2pm and my plan was to photograph the family headstones in the churchyard and then cross the road to the museum that was once the home of the family I’m delving into – the Pearson family.  I’m not going to go into the family here as I still have to add some photographs etc., but that churchyard is a family tree in itself as many of the names on the headstones tie in with the Pearson tree.

I digress, as I said the Pearson people are not the aim of this blog, the true star of these lines is a young man named John T Gledhill. 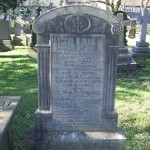 Who was John Taylor Gledhill, well he was born the son of Joe and Clara Gledhill, and lived in 1901 at The Green, Golcar.  Joe was aged 43 in the census and worked as a woollen percher.  Clara nee Taylor was aged 43 and the mother of  3 children aged between 9 and 16 (Jane, James and John).   For those of you wishing to find the family in 1901 they have been transcribed as GLADHILL.

By the time of the 1911 census the family were living at 38 Knowl Bank, Golcar in a 5 roomed house.  The 3 children were still living at home and all working within the woollen industry, weaver, spinners and twisters.  The census tells that Clara had had in total 4 children but only three had survived to the census and the couple had been married 26 years (Sept Qtr 1885 in the Huddersfield Registration District).

John Taylor Gledhill joined the Northumberland Fusiliers in Huddersfield and became Pte., 290/706.  He was later transferred to the Prince of Wales’s Own (West Yorkshire Regt.,) 16th Battalion and changed his service number to 40858.  Soldiers at this time changed their service number when they changed Battalion or Regiment and Officers during this time had no service number.  During WW2 service men and women kept their number for the duration of service and now officers had service numbers.

The service records for John don’t seem to have survived but from Soldiers who Died in the Great War I have been able to glean that he Died on 24 July 1917 .  The Commonwealth War Graves Commission confirms his service number for the West Yorkshire Rgt. It also confirms his date of death but also tells us where he now rests – Valenciennes (St Roch) Communal Cemetery and the position within the cemetery, IV D 27 – relating to section, row and number within that row.  Each cemetery has a box within or near the entrance where you can find a plan to help pinpointing the grave.

Another source, The Medal Rolls Index told that John was eligible for the Victory and British Medals which would have been given to his next of kin.

John is recorded on the War Memorial inside the church and also on the St John’s School  Memorial, also in the church. 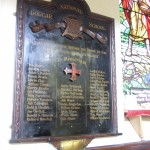 What did John look like ? How tall was he ? Did he have any scars or tattoos ? With the lack of his service record I may never know. Has John ever had a visitor to his resting place in France and how many people have strayed from the path and wondered among the many headstones and learnt of Johns fate – in modern times probably not many. But today John will have his name written once more and many will now know of this young man from Golcar.