Resting in Lijssenthoek CWGC Military Cemetery are over 35 young men from the Wakefield area.  I know there names and in which section they rest but only two I know very well – one being my great uncle Herbert Siddle.  Herbert was 1 of 13 children born to Charles Siddle and his wife Emma Mills – Emma lost 3 of her children within months of their births.

The siddle family lived in the Kirkgate area of Wakefield, with cousins living just up the hill on Warrengate, Stanley Road and in the East Moor area.

Herbert was born in  Wakefield in the year 1892 and by 1911 he was a driller at the local boiler works, living with his parents, 4 siblings, a nephew and a niece, an uncle and a boarder on Hardy Croft, Wakefield – 11 people in a 5 roomed house.  I was brought up in that house and I can’t imagine how it would have been living in a house with a dining kitchen, front room, 2 double bedrooms and an attic.  It would have been so different from when I lived there with my parents.

Herbert enlisted in Wakefield, joining the KOYLI and becoming Pte 242874.  He had been wounded in the Somme and sent home to recuperate before being sent back to France and Belgium.  In April of 1918 he was in a trench and was shot in the neck.  Very quickly he was taken to a Dressing Station at Kemmel before becoming one of the many who are KIA. 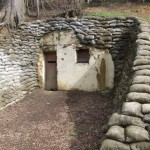 Mrs Siddle had 2 other sons serving in WW1, Claude served as 241166in the RFA; Edwin served as 268976 and had been in in the WRVAD Hospital – he had been awarded, along with his other service medals, the Silver War Badge which he would have worn on his lapel to show he had been injured out of service.

Coming forward many decades to the 1980’s my father and I often met and chatted with an old gentleman whom we met while shopping.  After not seeing him for many months I mentioned to dad that we’d not seen him in a while, to which I was informed that he had died.  The conversation went on about the gentleman only for it to be brought up that this man was next to or very near great uncle Herbert when he had been shot !!!  By the 80’s I’d already started the family tree and there are no words to describe how I felt at this moment – should I scream ‘Why did you not tell me?’, utter a few choice words or just throttle my dad.  The reply I got from a bemused father was ‘Well, didn’t think you’d be interested’, like hell!!

I could have throttled my dad but could give my great grandma a very big hug for she kept all the paperwork from the army, including an eye witness report from Sgt Greasby and the Red Cross along with a newspaper from the time with Herbert on the front page. The local paper tried to put a picture of the young men on the front page  when Wakefield lost a son, brother or father.